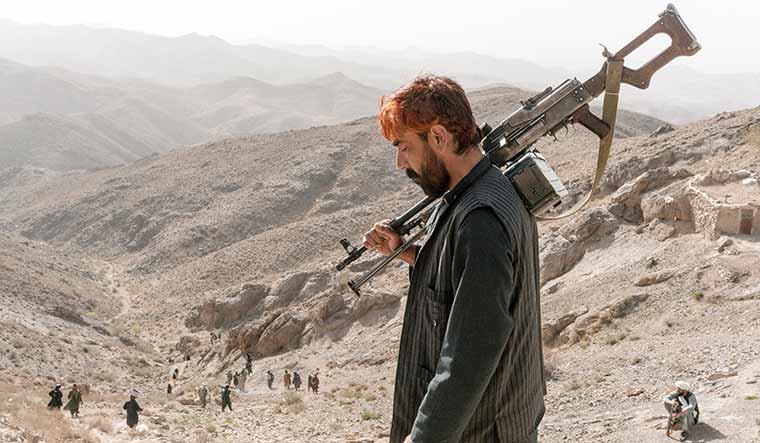 (File) A member of a Taliban faction in Herat province

During his three-day visit starting July 27, the Afghan Army chief is scheduled to meet key security officials, including the Indian Army Chief General M.M. Naravane and National Security Advisor Ajit Doval. Strategic observers in India are closely monitoring the visit due to its timing.

Despite their superiority in numbers compared to the Taliban, the military strategy of the Afghan forces seems to be to go on the defensive even as the Taliban continues to be aggressively offensive. The Taliban has blocked Afghan borders with other countries by taking control of border areas. However, they are yet to take control of urban areas.

Major General Shashi Asthana (Retd), a veteran Infantry general with 40 years experience in international fields and the UN, observed that due to the defensive approach of Afghan forces, their morale is slightly down.

Hundreds of Afghan soldiers have either surrendered or ran away after the Taliban assault, leading to a change of guard in the Afghan National Army. General Wali Mohammad Ahmadzai was appointed last month along with the new defence and interior ministers in Afghanistan.

"India needs to boost the morale of Afghan forces by providing professional military advice and equipping them with military assets to some extent," General Asthana said while adding that India has a handicap in helping Afghan forces directly, as the country does not share a border with Afghanistan. It is the PoK that shares border with Afghanistan.

Amid security concerns, India withdrew its staff from the consulate in Kandahar on July 11 and left its consulate in Mazar-e-Sharif and the embassy in Kabul. However, India can provide air maintenance to existing fleet of air assets.

Dramatic drawdown of US and NATO forces has led to chaos in the hilly nation and the Taliban has blocked Afghanistan borders with other countries by taking control of border and remote areas.

Besides training the Afghan National Army, India has been providing air assets to Afghanistan. Four Mi-35 attack helicopters were provided to Afghanistan in 2015-16 and four more Mi-35s in 2019 along with three Cheetah light helicopters. India has invested close to $3 billion for reconstruction and development projects in Afghanistan. The 218-km road between Delaram and Zaranj, India-Afghanistan friendship dam (also known as the Salma Dam), and the Afghan Parliament building which was inaugurated in 2015, were constructed with India's support.

Though Afghanistan had been approaching India with its wishlist of offensive military hardware, including artillery guns, tanks, and armoured vehicles, the Indian government has accepted the request for only non-lethal platforms.

Indian strategists believe that the Afghan Army chief's visit to India is aimed to boost the morale of his forces by showing that he is interacting with all the regional powers.  "His visit in a way is signalling not only to Afghan forces but also to Taliban. Afghan Army will certainly come with a wishlist in the turbulent time," Maj Gen Asthana said.

The rise of the Taliban is also a major security concern for India, as multiple Pakistan-based terror groups like Lashkar-e-Taiba and Jaish-e-Mohammed have joined hands with the Taliban.

"If Taliban comes into power, they will certainly go in for sharia law and Islamic methodology. And it will be a fair amount of support to terror outfits, (though the Taliban is denying giving support to any terror groups). We had an experience; when Taliban was in power, all terror groups were flourished under their patronage," a key South Block official observed.

The Indian military is also apprehensive that once the Taliban becomes powerful, the spillover of terror groups would give a tough time to Indian security forces. "Islamic State Khorasan and Al Qaida in South Asia, both terror outfits consider India as the main target," the official added.

The crisis in Afghanistan may also cause problems to Pakistan due to the influx of refugees from that country. Tehreek-e-Taliban Pakistan has strong strong presence in the Taliban, and and the former is opposed to the Pakistan Army, military observers pointed out.