US Secretary of State Blinken heads to Europe to meet with leaders of Italy, France, Germany

There is a lot at stake: the pull out of Afghanistan and China 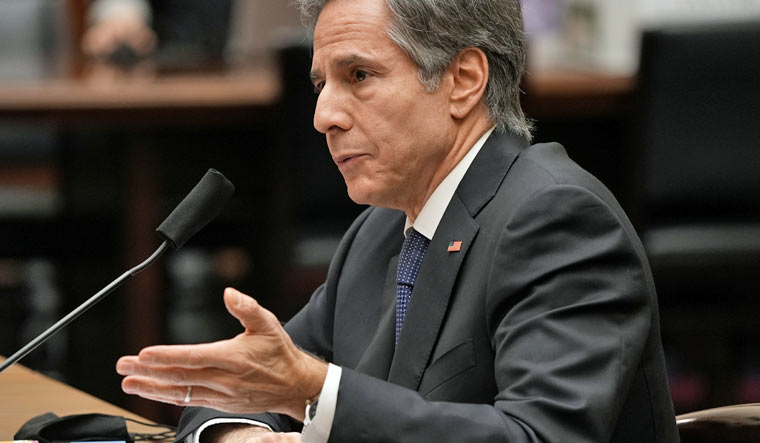 It will be an American summer in Europe this year. Less than two weeks after President Joe Biden's first foreign trip to Europe to attend the G7, Secretary of State Antony Blinken is back in the continent on a three-country tour to Germany, France and Italy. The agenda is clear: continue the charm offensive and bring multilateralism back into the diplomatic lingo. There is a lot at stake: the pull out of Afghanistan and China.

“Wheels up for my visit as Secretary to Germany, France, and Italy. First stop, Berlin, where I’ll be engaging with our partners to further peace and stability through the Berlin II dialogue. Looking forward to a productive trip!,'' tweeted Blinken on Wednesday.

Blinken will travel to Germany to take part in a conference on Libya and discuss with his German counterpart ways to counter Holocaust denial and antisemitism. The Libya conference will focus on building a stable government in the country with elections. On the agenda will also be getting foreign fighters to leave. In France, Blinken will focus on strengthening relations and in Italy, he will attend a meeting on Syria. He will also visit the Vatican. He will end his trip with the G20 summit in the Italian cities of Bari and Matera.

“This is really an opportunity for Secretary Blinken to reiterate the President’s message and speak with our oldest ally about areas of cooperation, including global security, again, the pandemic’s—recovery from the pandemic, and repairing and modernizing our alliances,” Acting Assistant Secretary for European and Eurasian Affairs Philip Reeker has been quoted as telling reporters.

Biden is keen to get Europe to move past the Donald Trump shock and signal that his politics are different. Or as Blinken tweeted on June 18, “Look forward to an important trip to Germany, France, and Italy. I’ll meet foreign leaders to express our commitment to the Transatlantic Alliance, discuss Libya, co-chair the D-ISIS Ministerial, and address key issues at the G20. We’re stronger when we face challenges together.''

The band-of brothers approach is what Biden is hoping for. He made this clear at his first global address at the Munich Security Conference in February. “I know the past few years have strained and tested the transatlantic relationship," Biden said. “The United States determined to reengage with Europe, to consult with you, to earn back our position of trusted leadership.” It is especially, important for the US to win this position back, especially, with the troop withdrawal in Afghanistan.

Biden has tried to work with NATO allies, like Turkey—now committed to guarding the Kabul airport—to try and to ensure a semblance of a plan for security post the pull-out. There is also the revival of the Iranian deal, negotiations are still ongoing, a suggestion that things moving in the right direction. With the rise of China, and competitive dynamics unleashed—courtesy Trump and an antagonistic Beijing—America will need older allies to combat the threat together.

It helps that there has been a growing concern with Beijing's bullying tactics. The EU-China trade agreement--negotiated painstakingly--has gone into a deep freeze. Brussels is believed to be considering blocking products that use slave labour, as is Britain and Canada. While Blinken has denied that America has a design to contain China, but defend a rule-based order. "It is not our purpose to try to contain China or to hold China down," Blinken told reporters at a press conference before the G7 meeting.

However, the G7 summit's messaging left no room for doubt that America is hoping to find new ways to put pressure on the dragon. The G7 called for a transparent expert-led study including in China under the WHO to investigate the origins of the virus. This comes at a time when the lab-escaped theory is gaining credibility. "We haven't had access to the laboratories, Biden has been quoted by reporters. The G7 signed a declaration specifically, naming China and calling on her to "respect human rights and fundamental freedoms", especially in the Xinjiang region. "We're in a contest, not with China per se... with autocrats, autocratic governments around the world, as to whether or not democracies can compete with them in a rapidly changing 21st century," Biden has been quoted as saying. Nothing sells more in Europe than human rights. The game has just begun.