NATO approaches Qatar to set base to train Aghan forces 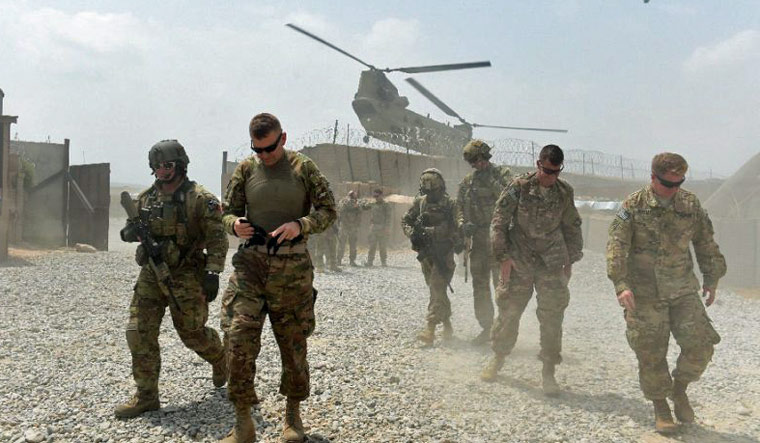 [File] US troops in Afghanistan | AFP

Security officials under NATO command have approached Qatar to set up a base that can be used to train Afghan special forces. The oil-rich nation of Qatar has been home to the Taliban's political office since 2013.

NATO Secretary General Jens Stoltenberg said that the alliance’s leaders have committed to continue to provide training and financial support to the Afghan security forces.

The US remains committed to its plan to withdraw troops from Afghanistan by September 11, after two decades of war. Joining the US troops would be troops from 36 countries involved in NATO's Resolute Support mission in Afghanistan. The Resolute Support had been committed to train and equip Afghan security forces to fight the extremist Islamist group Taliban, which was ousted from power in 2001.

“We are holding talks to earmark a base in Qatar to create an exclusive training ground for senior members of the Afghan forces,” a senior Western security official in Kabul said.

Representatives of the US and Taliban have been meeting in Qatar to negotiate peace in Afghanistan and the former pulling out troops from Afghan soil.

US president Biden, speaking of NATO's  continued support to Afghan troops said, “And I welcomed our Allies and partners to recognize that counterterrorism -- that counterterrorism efforts must continue to ensure that Afghanistan never again becomes a safe haven for attacks on our countries, even as we take on terrorist networks in the Middle East and Africa."

NATO leaders, however, are yet to come to a consensus on who would run Kabul's international airport, but the organisation announced that it would continue to provide funding for operations at Hamid Karzai International Airport.

About 7,000 non-US forces including those from NATO nations, Australia, New Zealand and Georgia are left in Afghanistan. With an upsurge in offensives from the Taliban, there is fear that Afghanistan’s worn-out security forces could be easily overrun by the Taliban.

Stoltenberg also said that NATO was looking to increase its presence in Iraq, where the focus would be to train Iraqi forces. “This expansion of NATO Mission Iraq, including additional support to the Iraqi security institutions, will be demand-driven, incremental, scalable, and based on conditions on the ground," he said.