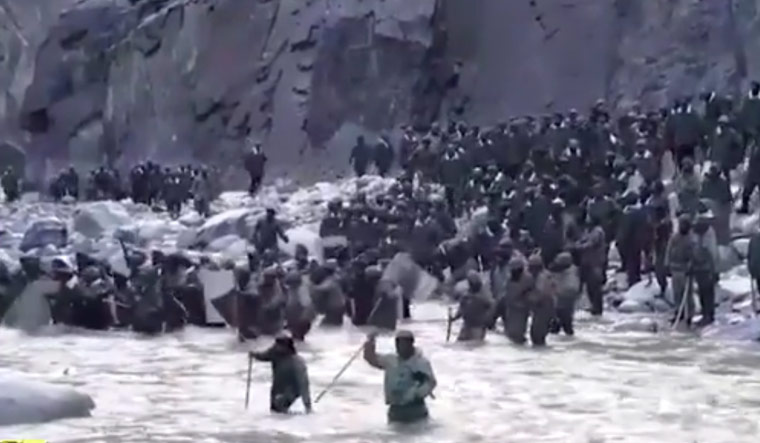 With the first anniversary of the fatal clash between Chinese and Indian forces at the Galwan valley in Ladakh approaching, Beijing appears to have begun mind games. The clash on June 15 last year left 20 Indian soldiers dead. China has claimed four of its soldiers were killed in the clash, the first fatal incident between the two nations in four decades.

In recent days, a speech by a Chinese soldier at a meeting organised by the country's Central Military Commission has gone viral on Chinese social media platform Weibo. Qi Fabao was the regimental commander of the People's Liberation Army's Xinjiang Military Command, who was involved in the Galwan clash. Ironically, in February this year when China revealed it had suffered fatalities in the Galwan clash, initial reports had claimed Qi was among the fatalities, but it later emerged he had suffered serious injuries. Footage from the clash had shown Qi bleeding from the head.

"If the troop is compared to a sharp sword, then the courage and uprightness of soldiers is the blade of the sword. We are not afraid of sacrifice, and we have always held on to the belief that we would rather sacrifice our lives than lose an inch of our territory," Qi was quoted as saying by Global Times. Qi also spoke of the four soldiers who died in the clash.

Newsweek reported, Qi "and others involved in last summer's border skirmish in the Himalayas are expected to be celebrated during the Chinese Communist Party centennial on July 1 and again when the PLA marks Army Day on August 1".

Even though India and China have announced efforts to disengage forces in Ladakh, progress has been slow. In late May, Indian Army chief General M.M. Naravane told PTI that India had made it clear "no de-escalation can take place before disengagement at all friction points". Naravane added, "Indian Army is very clear that no loss of territory or unilateral change in status quo will be permitted. We are dealing with the Chinese in a firm and non-escalatory way, ensuring the sanctity of our claims in eastern Ladakh."