PM Modi thanks Kamala Harris for assurance of vaccine supplies

India to receive first batch of doses by month end 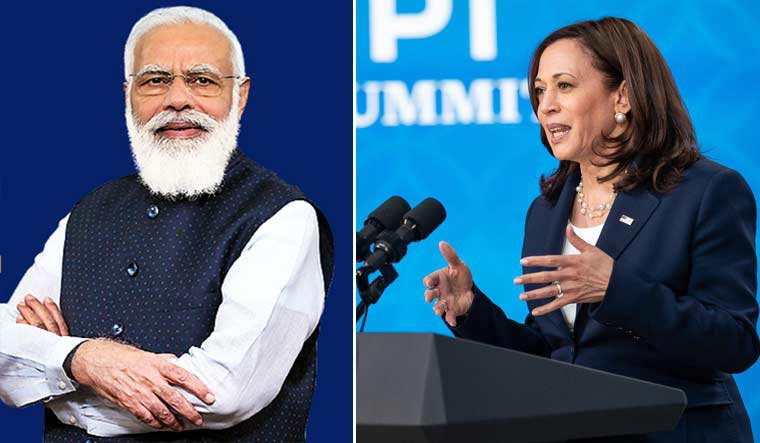 Prime Minister Narendra Modi spoke to US Vice President Kamala Harris on Thursday, thanking her for the US assurance of vaccine supplies under the Strategy for Global Vaccine Sharing programme, through which it aims to distribute 80 million doses by the end of June. India is set to become the first country to receive doses under this programme, which supplies to arrive by the end of the month.

Spoke to @VP Kamala Harris a short while ago. I deeply appreciate the assurance of vaccine supplies to India as part of the US Strategy for Global Vaccine Sharing. I also thanked her for the all the support and solidarity from the US government, businesses and Indian diaspora.

In a series of tweets, Modi said he also thanked Harris for all the support and solidarity from the US government, businesses and the Indian diaspora.

The call came after US President Joe Biden announced that the country would give 75 per cent of its unused vaccine doses, around 19 million, to the vaccine sharing programme COVID-19 Vaccines Global Access (COVAX), and aimed to share 80 million doses with the world by June end.

“As the United States continues our efforts to get every eligible American vaccinated and fight COVID-19 here at home, we also recognize that ending this pandemic means ending it everywhere,” Biden said.

“Already the United States has committed $4 billion to support COVAX, and we have launched partnerships to boost global capacity to manufacture more vaccines. My administration supports efforts to temporarily waive intellectual property rights for COVID-19 vaccines because, over time, we need more companies producing life-saving doses of proven vaccines that are shared equitably. We have already shared more than 4 million doses of vaccine with Canada and Mexico, and last month, I announced that, by the end of June, the United States will share 80 million doses of our vaccine supply with the world,” he said.

The 19 million doses will be split up across various regions, with just six million doses to be distributed to countries “experiencing surges” including Canada, Mexico, South Korea and India.

“At least 75 percent of these doses—nearly 19 million—will be shared through COVAX, including approximately 6 million doses for Latin America and the Caribbean, approximately 7 million for South and Southeast Asia, and approximately 5 million for Africa, working in coordination with the African Union and the Africa Centres for Disease Control and Prevention. The remaining doses, just over 6 million, will be shared directly with countries experiencing surges, those in crisis, and other partners and neighbors, including Canada, Mexico, India, and the Republic of Korea,” the statement said.

In total, the US has secured 1.21 billion doses according to a Bloomberg analysis. Globally, 9.6 billion doses had been reserved, mostly by richer countries that bought more doses than their population in a bid to ensure supply for their own citizens.

The COVAX vaccine sharing alliance had aimed to have at least two billion doses ready by the end of 2021, which it hoped would be enough to inoculate frontline workers. COVAX aims to have funded countries receive enough doses to “vaccinate up to 20 per cent of their population in the longer term”.

Prime Minister Narendra Modi on Thursday spoke to the US Vice President Kamala Harris and expressed his appreciation for assurance of vaccine supplies to India as part of the US Strategy for Global Vaccine Sharing, under which India is expected to get the first batch of doses by the month-end.

The US embassy also issued a statement from Symone Sanders, senior advisor and chief spokesperson for Harris on her calls with leaders of four countries, including Modi, on the global allocation plan for the supply of the COVID-19 vaccine doses to India and other countries by the month-end.

In the four separate calls, she said that the US will begin sharing the first 25 million (2.5 crore) doses of COVID-19 vaccines to their respective countries and others, as part of the Biden-Harris administration's framework for sharing at least 80 million (8 crore) vaccines globally by the end of June.

She reiterated that the administration's efforts are focused on achieving a broad global coverage, responding to surges and other urgent situations and public health needs, and helping as many countries as possible who requested vaccines.

The four leaders thanked the vice president, and they agreed to continue working together to address COVID-19 and advance our mutual interests around the world, the US government statement said.

Officials here said that Modi and Harris discussed ongoing efforts to strengthen the health supply chain between the US and India, including in the area of vaccine manufacturing. They highlighted the potential of the India-US partnership as well as the QUAD vaccine initiative in addressing the long-term health impact of the pandemic.

The prime minister also said he hopes to welcome Vice President Harris in India soon after normalisation of the global health situation.