11 policemen were freed by the Tehreek-e-Labaik on Monday 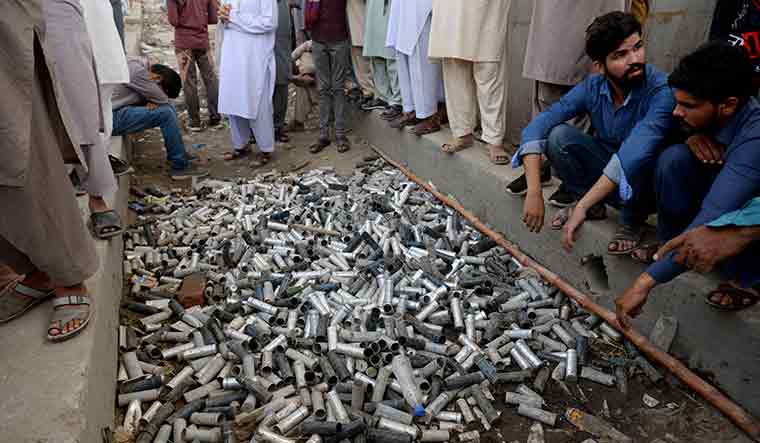 Supporters of the banned Islamist political party Tehrik-e-Labaik Pakistan (TLP) display a pile of used teargas canisters which, according to them, were fired by the police during a protest in Lahore, Pakistan April 19, 2021. REUTERS/Stringer

An outlawed Pakistani Islamist political group freed 11 policemen almost a day after taking them hostage in the eastern city of Lahore amid violent clashes with security forces, the country's interior minister said Monday.

Supporters of the hardline Tehreek-e-Labaik Pakistan party attacked a police station near their rallying point and on Sunday took the policemen hostage. The group is protesting the arrest of their leader, Saad Rizvi, and pressuring the government of Prime Minister Imran Khan to immediately expel France's envoy over the publication of blasphemous caricatures.

But in a video message, Interior Minister Sheikh Rashid Ahmad said the supporters of Rizvi in fact had taken 11 policemen hostage. They were freed after a successful first round of talks with the government, which released a photo it said showed the officers had been tortured.

The tension stems from last year's remarks by the French leader when he tried to defend the publication of blasphemous caricatures by a satirical newspaper, drawing condemnation from across the Muslim world.

Ahmad said the demonstrators since last Monday had blocked roads and highways at 192 places, but security forces cleared their 191 sit-ins in recent days. He hoped the last troubling point in Lahore, where Rizvi's supporters were still rallying, will be cleared as talks between the representatives of Rizvi and the Punjab government proceed.

Last week, Pakistan's government banned the TLP under the Anti-Terrorism Act. The move was based on the rationale that the party had a history of organising violent nationwide protests. However, the ban itself was met by protests. The government went on to order media organisations not to cover the party's activities.

When police and security forces attempted to clear hundreds of protesting workers from their party headquarters on Sunday, three TLP members were killed and several more were injured. The TLP went on to storm a police station, taking several hostage. Their demands on Sunday included the expulsion of the French ambassador, the release of party chief Saad Rizvi, the removal of the ban on the party and the release of activists arrested as well as the FIRs against them to be revoked.

Rizvi was arrested a day after he asked the government to honour what he said was a commitment it made in February to his party to expel by April 20 the French envoy over the publication.

Rizvi's party said the government agreed to a deal under which it would expel the French ambassador before April 20. Instead, the government arrested their leader before the deadline. The government said that it only committed to discussing the matter in Parliament.

Rizvi's party supports the country's controversial blasphemy laws and has a history of staging violent rallies to influence the government. It has denounced French President Emmanuel Macron since October last year, saying he tried to defend the caricatures.

The images had been republished by the satirical magazine Charlie Hebdo

France on Monday recalled 15 of its diplomats, following three days of violent protests that had been called by the TLP, Figaro newspaper reported. Last Thursday, France issued a travel warning to its citizens in Pakistan, urging them to temporarily leave the country.

“Due to the serious threats to French interests in Pakistan, French nationals and French companies are advised to temporarily leave the country,” the French embassy said in an email sent to French citizens.

Speaking at the groundbreaking ceremony for the Margalla Highway in Islamabad on Monday, Prime Minister Imran Khan said that political parties and religious parties had often used Islam “wrongly” and in such a way that they ended up dealing damage to their own country. Khan said the people of Pakistan loved the Prophet Muhammad to a degree he had not seen in any other country. For this reason, he said, he was “saddened that many times this love is misused”.

“Does the government not worry about this? That when there is disrespect of Holy Prophet’s (PBUH) honour then aren't we pained?" he asked.

Referring to the protests TLP held in response to the republishing of a Charlie Hebdo cartoon in France, Khan said, "Violent protests in Pakistan will make no difference to the country where the blasphemous act has occurred."