Russia and China do not recognise Kosovo's independence from Serbia 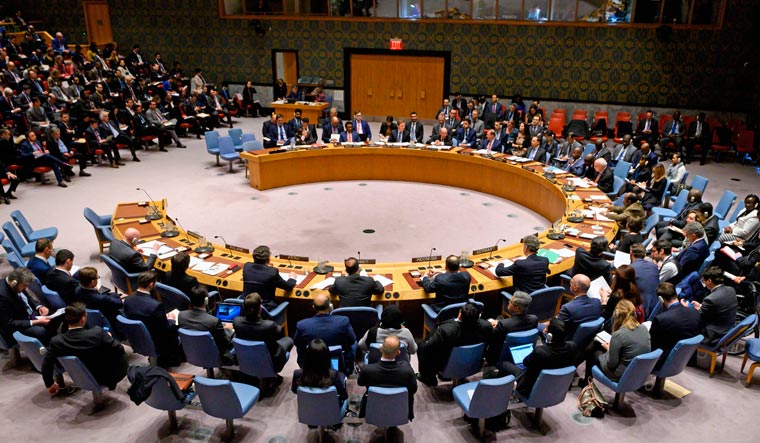 Russia has tried for the first time to prevent Kosovo's representative from speaking at the UN Security Council with the country's flag in the background, saying the majority of council members don't recognise its independence from Serbia.

The request to ban the flag by Russia's deputy UN ambassador Dmitry Polyansky at the start of a scheduled open council meeting on Kosovo on Tuesday led to a 45-minute suspension of the virtual meeting while the council's 15 members discussed the issue in private.

Polyansky said "eight of the 15 members of the Security Council do not recognize Kosovo as a country" and therefore the flag shouldn't appear behind Kosovo's Foreign Minister Donika Gervalla. He said Russia did not object to her speaking.

The United Kingdom's legal counsellor Chanaka Wickremasinghe retorted that Security Council video meetings are not formal meetings and said Kosovo's flag had appeared behind its representative during the last meeting.

After the COVID-19 pandemic halted most in-person meetings at UN headquarters, Russia insisted that any meeting not held in the Security Council chamber, including all those held virtually, would be considered informal.

When the meeting finally resumed, the council's current president, Vietnam's UN Ambassador Dang Dinh Quy, said the backgrounds of virtual meetings should not disrupt council sessions and the flag could stay.

Gervalla was one of three scheduled speakers and when she briefed the council, Kosovo's blue flag with six white stars above a map in gold of the country was behind her.

Polyansky began his presentation afterward noting "the lack of respect towards the UN Security Council's decisions from somebody invited in a personal capacity as representative of Kosovo's Albanians".

"The Russian Federation and most of the other members of the Security Council do not recognise Kosovo's independence, and the demonstration of the flag of that non-recognized entity is not acceptable," he said.

Polyansky noted that video meetings of the council are informal and temporary and the council's rules of procedure don't fully apply.

"Whatever background Ms. Gervalla has chosen for herself, whether these are photos or flags or other things ... that does not have any impact whatsover on this," he said.

Tensions over Kosovo remain a source of volatility in the Balkans.

Kosovo declared independence from Serbia in 2008, a decade after a brutal 1998-1999 war between separatist ethnic Albanian rebels and Serb forces, which ended after a 78-day NATO air campaign that drove Serb troops out and a peacekeeping force moved in.

As of last September, 98 of the U.N.'s 193 member nations had recognized Kosovo including the vast majority of European Union members, the UK and the United States. Russia, which has close ties to Serbia, and China are among the countries that have not recognised its independence.

Negotiations to normalize ties between Kosovo and neighbouring Serbia, which started a decade ago, stalled last year.

UN special envoy for Kosovo, Zahir Tanin, told the council he met Kosovo's new prime minister, Albin Kurti, on Monday "who assured me of his understanding of the strategic importance of advancing the dialogue with Belgrade."

He said he spoke to Serbian President Aleksandar Vucic on Tuesday morning who highlighted "the importance of the dialogue for peace and stability, and reiterated his hope that this dialogue should be intensified, in order to produce results beyond those previously accomplished."