With machine guns and RPGs, gunmen free over 1,800 prisoners in Nigeria

Manhunt on for the inmates, President Buhari calls it act of terror 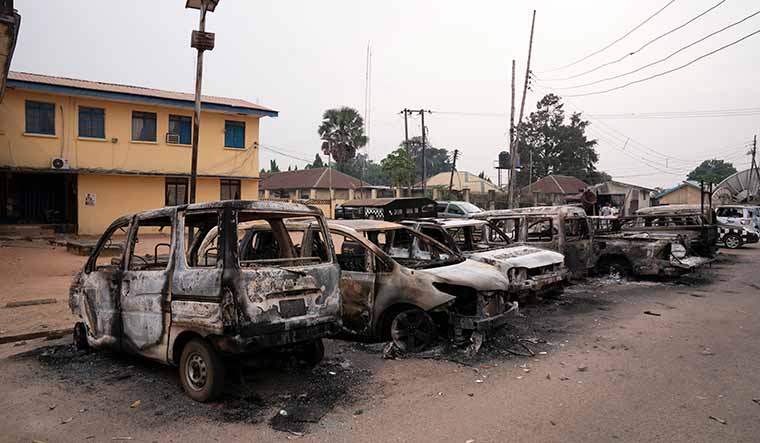 Burned vehicles are parked outside the police command headquarters in Owerri, Nigeria, on Monday, April 5, 2021. Hundreds of inmates escaped from a prison in the southeastern Nigerian city after a series of coordinated attacks, according to government officials. (AP Photo/David Dosunmu)

In one of the largest prison breaks in recent times, gunmen in Nigeria freed over 1,800 inmates from a prison facility in Owerri, Imo in southeastern Nigeria, after a two-hour-long gun battle that took place after midnight.

At 2 am in Owerri, the gunmen attacked the facility with machine guns and rocket-propelled grenades (RPGs), overwhelming government security forces. They used explosives to break into the administrative block.

Authorities say the gunmen belong to a rebel group that has sought secession for the Biafra region of Nigeria’s southeast.

One inmate died during the attack, due to the stampede that followed, while a police officer sustained a minor bullet wound. An attempt to attack the armoury at the prison was repelled, police said.

A search operation has been underway to find the estimated 1,844 inmates who escaped, a mix of those who have already been convicted and those who are still under trial. 35 prisoners refused to leave during the incident.

The Indigenous People of Biafra denied taking part in the attack, saying their paramilitary wing was busy “chasing terrorists” in the bush and had no mandate to ”attack security personnel or prison facilities”.

President Muhammadu Buhari condemned the deadly insurgent attack in a statement, calling it an act of terrorism. He praised the initial response by security guards and security forces for preventing greater loss of life and the destruction of public property, and directed security and intelligence agencies in the state and the geo-political zone to fully mobilize and go after the terrorists, apprehend them and get them punished under the full weight of the law.