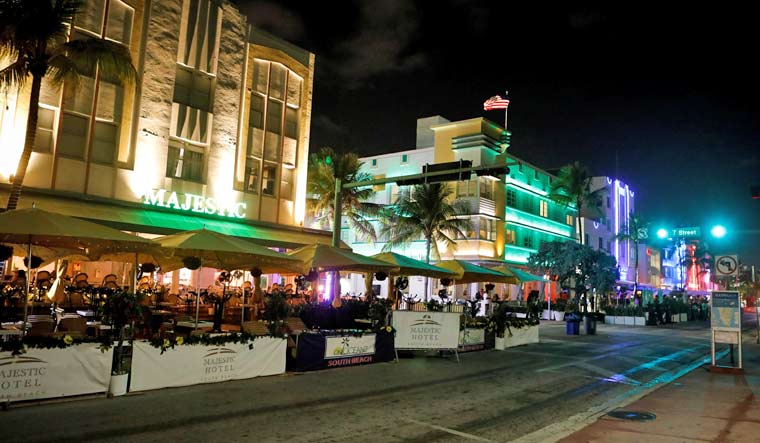 A view shows an empty Ocean Drive after an 8pm curfew was imposed by local authorities in an effort to control spring break crowds amid the coronavirus disease (COVID-19) pandemic, in Miami Beach, Florida, US | Reuters

Miami Beach officials, on Sunday, arrested dozens of people in an attempt to disperse the unruly spring break crowd gathered by the thousands. Officials said the partiers fighting in the streets destroying restaurant property and refusing to wear masks has become a serious threat to public safety, AP report reads.

To prevent more party-goers from gathering, city officials decided to extend the 8 pm curfew for another week and said that it could be extended till April if needed. The curfew would be from 8 pm to 6 am. The police fired pepper balls into the crowd to crack down on the spring breakers who were flouting COVID-19 norms.

Authorities said that theses weren't college students, but adults who were looking to let loose in states that were fully open during the pandemic. Law enforcement officials from at least four agencies and SWAT teams were deployed to contain the crowd.

“We're in the middle of a pandemic. The virus is still very present in our community,” Miami Beach Mayor Dan Gelber told AP. Food and beverage businesses have been suspended till March 24.

Restaurants have asked for permission to deliver food after curfew. Maimi lost billions of dollars they would normally earn, when the pandemic struck last year.