Officials from the consulate weren't permitted to attend the proceedings 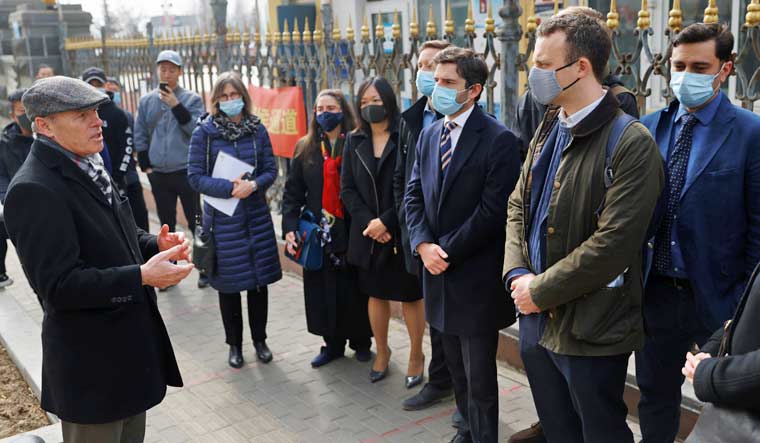 Jim Nickel, Charge d'affaires of the Canadian Embassy in Beijing, speaks to foreign diplomats outside the Intermediate People's Court where Michael Spavor, a Canadian detained by China in December 2018 on suspicion of espionage, is expected to stand trial | Reuters

China, on Friday, is expected to begin the first trial for one of the two Canadians being held in custody for more than two years. Michael Kovrig and Michael Spavor were arrested in retaliation to the arrest of Meng Wanzhou a senior executive of Huawei. Wanzhou committed fraud by misleading the HSBC bank about Huawei's business dealings in Iran, violating US sanctions on Iran.

The US is seeking Wanzhou's extradition to face charges of fraud. While the two Canadians have been in prison, Wanzhou has been under house arrest, where she is allowed outings to purchase essentials.

Spavor, an entrepreneur with business interests in North Korea, was charged with spying for a foreign entity and illegally providing state secrets. Kovrig, an analyst and former diplomat, was arrested on charges of spying for state secrets and intelligence. Details of the charges and trial proceedings in national security cases are usually held behind closed doors. At the extradition hearing, Wanzhou's lawyers said, Canadian officials abused their power when they conspired with the US government to arrest her. Canadian Border Services Agency officers took Wanzhou's phones, obtained their passwords and handed them to the Canadian police so that data would be shared with the FBI.

China has asked for Wanzhou's immediate and unconditional release. China says the arrest has been engineered by the US to contain China's growing rise.