Protests swell despite Myanmar military's threat to use force

So far, three protestors have been fatally shot 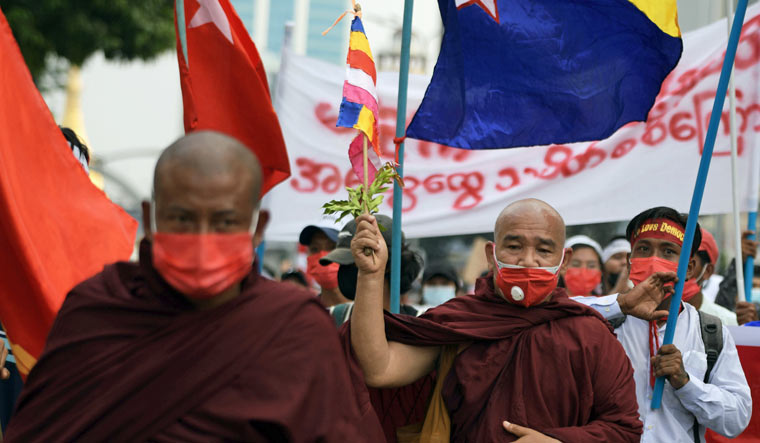 A Buddhist monk holds a flag during a protest against the military coup in Yangon, Myanmar | Reuters

More than 1,000 protesters gathered near the US embassy in Yangon despite barriers blocking the way. And despite a threat by the military government that lethal force would be used against protesters.

Protesters have been taking to the streets ever since a military coup ousted National League of Democracy leader Sung San Suu Kyi on February 1.

The protesters gathered near the US embassy in Yangon eventually dispersed to avoid confrontation after 20 military trucks with riot police arrived. Protests, however, gathered in other parts of the city, including near the Sule Pagoda.

In a response to a call for a nationwide strike, factories, workplaces and shops were shuttered. A warning the military government issued via a television message said, protesters are now inciting people especially emotional teenagers and youths, to a confrontation path where they will suffer the loss of life. Of the thousands of protesters gathered in the capital, several of them were on motorbikes to avoid police action.

So far, three protestors have been fatally shot. The protesters are demanding the release of Sung San Suu Kyi and other leaders of the elected government. The military has been insisting that the results of the elections, where Suu Kyi won by a majority are fraudulent.

On Saturday, a General Strike Committee was formed by more than two dozen groups to provide a more formal structure for the resistance movement and launch a spring revolution, AP reported.

European Union foreign ministers on Monday have tasked the bloc's top diplomat and its executive wing with drawing up a series of measures against Myanmar's military leaders responsible for the coup.

On February 19, leaders of Britain and Canada announced sanctions on Myanmar military leaders. Britain has imposed travel bans on three generals and is taking steps to prevent any aid from helping the military and stop British businesses from working with the army, while, Canada announced that it would impose sanctions on nine military officials.

Leaders of the European Union have called for a de-escalation of the situation in Myanmar and restoration of a civilian government.

The EU ministers condemned the arrests of Aung San Suu Kyi and other leaders and have called for their release. They also expressed solidarity with citizens and said that any sanctions imposed will not affect ordinary people.