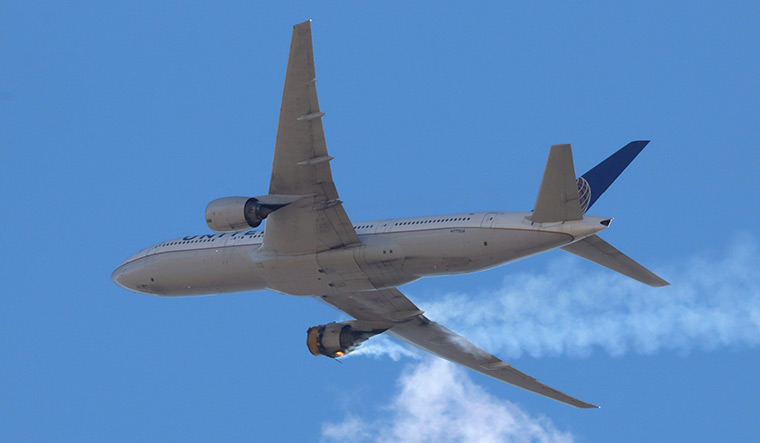 Following an incident where a United Airlines flight in the US started dropping pieces of its engine across parts of Denver, the plane’s manufacturer, Boeing, has recommended grounding of all 777s using the Pratt & Whitney 4000-112 engine while the National Transportation Safety Board (NTSB) investigates what happened.

"Boeing is actively monitoring recent events related to United Airlines Flight 328. While the NTSB investigation is ongoing, we recommended suspending operations of the 69 in-service and 59 in-storage 777s powered by Pratt & Whitney 4000-112 engines until the FAA identifies the appropriate inspection protocol,” the company said in a statement.

While Air India also flies Boeing 777s, it does not so with models bearing the affected engines, so no 777s are likely to be grounded in India, The Hindu reported. The particular model with the engine in question is flown by United Airlines in the US and by operators in Japan and South Korea.

The Directorate General of Civil Aviation (DGCA) has asked Air India to “more vigilant during ground checks" of the engines as a precaution.

The incident, which took place on Sunday, saw the plane perform an emergency landing after one of its engines suffered a catastrophic failure and rained debris on a Denver suburb. The plane landed safely, and nobody aboard or on the ground was reported hurt, authorities said.

The Federal Aviation Administration said in a statement that the Boeing 777-200 returned to the Denver International Airport after experiencing a right-engine failure shortly after takeoff. Flight 328 was flying from Denver to Honolulu when the incident occurred, the agency said.

United said in a separate statement that there were 231 passengers and 10 crew on board. All passengers were to be rebooked on a new flight to Hawaii, the airline said.

The Broomfield Police Department posted photos on Twitter showing large, circular pieces of debris leaning against a house in the suburb about 25 miles (40 kilometers) north of Denver. Police are asking that anyone injured come forward.

Passengers recounted a terrifying ordeal that began to unfold shortly after the plane full of vacationers took off.

The aircraft was almost at cruising altitude and the captain was giving an announcement over the intercom when a large explosion rocked the cabin, accompanied by a bright flash.

“The plane started shaking violently, and we lost altitude and we started going down,” said David Delucia, who was sitting directly across the aisle from the side with the failed engine. “When it initially happened, I thought we were done. I thought we were going down." Delucia and his wife took their wallets containing their driver's licenses and put them in their pockets so that “in case we did go down, we could be ID'd," said Delucia, who was still shaken up as he waited to board another flight for Honolulu.

On the ground, witnesses also heard the explosion and were scared for those on board.

Tyler Thal, who lives in the area, told The Associated Press that he was out for a walk with his family when he noticed a large commercial plane flying unusually low and took out his phone to film it.

“While I was looking at it, I saw an explosion and then the cloud of smoke and some debris falling from it. It was just like a speck in the sky, and as I'm watching that, I'm telling my family what I just saw and then we heard the explosion,” he said in a phone interview. “The plane just kind of continued on, and we didn't see it after that.”

Thal was relieved to learn no one was injured or killed from what he saw.

Video posted on Twitter showed the engine fully engulfed in flames as the plane flew through the air.