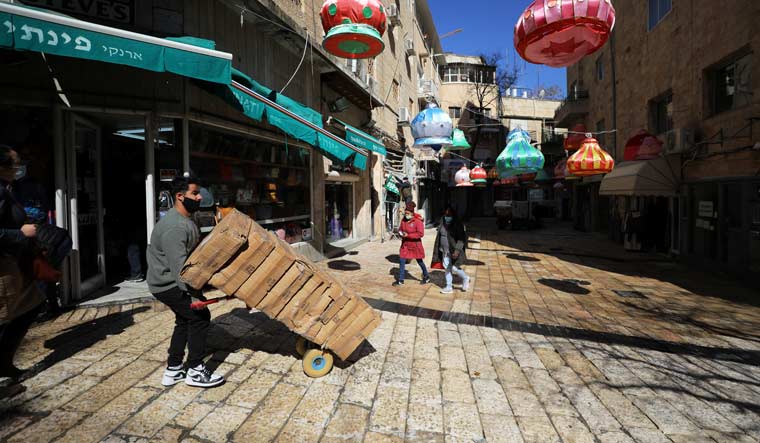 A man carts boxes near shops as Israel reopens swathes of its economy, while it continues to lift restrictions of a national lockdown to fight the coronavirus disease (COVID-19), in Jerusalem February 21, 2021. REUTERS/Ammar Awad

With nearly half of its population inoculated against COVID-19, the highest vaccination rate in the world, Israel has started unlocking its economy. From today, gyms, pools, cinemas and restaurants are opening back up for people who have received two doses of the coronavirus vaccine.

The data included at least 1.7 million people who had been administered a second shot by January 30, two weeks prior to the findings. Nearly half of Israel’s 9.3 million population have been vaccinated so far, with nearly 3 million having received the second shot. Prime Minister Benjamin Netanyahu said 95 per cent of adults older than 50 would be vaccinated by the next two weeks.

This makes it the largest real-world study of the Pfizer vaccine.

The restrictions have been further loosened for those who received the vaccine, as they will receive a “green badge” that will allow them to attend cultural or sporting events or travel abroad.

Most grade school and high school classes have reopened after a nearly two-month closure, along with museums, libraries, malls and markets. Some restrictions on the number of people in attendance remain in place.

The entire education system is expected to return to normal operations early March. Israel in total held three nationwide lockdowns since the beginning of the coronavirus pandemic.

After striking a deal with Pfizer to trade data for doses, Israel's vaccine campaign became the world's speediest in the past two months.

However, Israel has faced international criticism for largely excluding Palestinians in the West Bank and Gaza Strip from its highly successful vaccination campaign. The dispute highlights the Palestinians' reliance on Israel even as they struggle to combat the pandemic on their own.

Last week, Israel facilitated the transfer of the first 2,000 doses of Russia's Sputnik V vaccine from the West Bank to the Gaza Strip.

The coronavirus is still spreading rapidly in Israel, however, and restrictions on movement and assembly have remained in place since the government imposed a countrywide lockdown in late December.

Israel has recorded at least 743,000 cases of COVID-19 and at least 5,521 deaths since the start of the pandemic last year. Its three lockdowns have paralyzed the economy and driven unemployment to over 20 per cent.