In new tactic, Navalny supporters to rally in courtyards

Over 11,000 have been detained from the protests, with hundreds sentenced 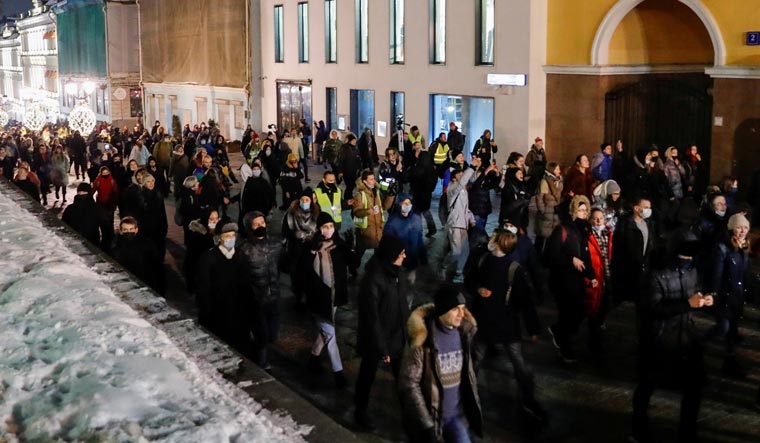 People participate in a demonstration after Russian opposition leader Alexei Navalny was sentenced to three and a half years in jail, in Moscow, Russia February 2, 2021. | Reuters

A top ally of Russian opposition leader Alexei Navalny has announced a new anti-government protest, urging residents of big cities to briefly gather in residential courtyards on Sunday evening with their cellphone flashlights on.

Navalny strategist Leonid Volkov said the protest will start at 8 p.m. and last 15 minutes. The new rally format similar to the tactics opposition supporters employed during protests in the neighboring Belarus could prevent Russian police from interfering and allow anyone to participate, Volkov wrote Tuesday in a Facebook post.

The protest will coincide with Valentine's Day.

You will raise your phone flashlights and someone, maybe, will bring candles and form a heart shape with them ... You will take a picture of it from above, from one of the apartments, and post it on Instagram. Let's have social media feeds filled with thousands of shining hearts from dozens of Russian cities, Volkov wrote. No OMON (riot police), no fear.

Navalny, 44, an anti-corruption investigator and Russian President Vladimir Putin's most prominent critic, was arrested Jan. 17 upon returning from Germany, where he spent five months recovering from a nerve-agent poisoning that he blames on the Kremlin. Russian authorities have rejected the accusation.

His arrest and jailing sparked nationwide protests, with tens of thousands of people rallying across Russia for two weekends in a row in the largest outpouring of discontent in years.

Russian authorities responded with a harsh crackdown. More than 11,000 people have been detained, and hundreds were handed jail terms. Several of Navalny's close allies face criminal charges and are under house arrest.

Last week, a Moscow court ruled that while Navalny was recovering in Germany, he violated the probation terms of his suspended sentence from a 2014 money-laundering conviction and ordered him to serve two years and eight months in prison. Even before that ruling, Navalny rejected the 2014 conviction political persecution and the European Court of Human Rights called it arbitrary and manifestly unreasonable.

In the wake of the heavy police crackdown, Volkov said that protests should pause until spring, as trying to maintain rallies every weekend would only lead to many more arrests.

However, on Tuesday he cited the need to adopt something that is stronger than fear of repressions and to hold a demonstration that police wouldn't be able to derail.

We have already become the majority, but Putin divides us by (riot police) cordons so that we can't see each other and see how many of us there are. We need to find a way to overcome that, Volkov wrote.

Asked whether the opposition's call to gather in courtyards can be considered unlawful, Kremlin spokesman Dmitry Peskov said it was hard to say," but assured reporters that if someone in Russia violates the law, they will be held accountable by law enforcement