US will repair its alliances and engage with world once again: Biden 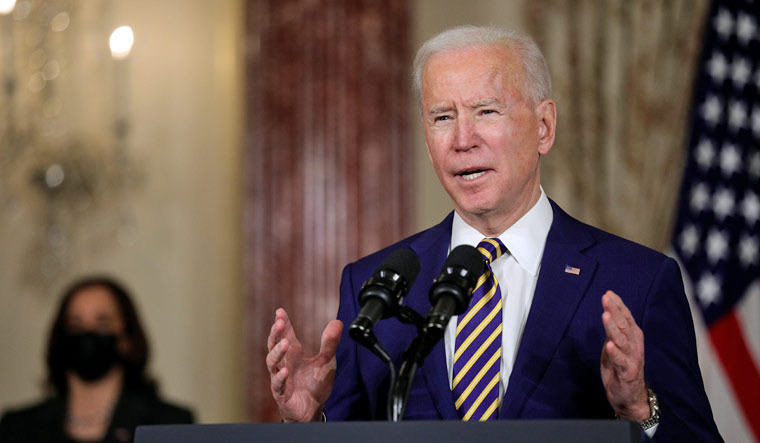 Asserting that America and its diplomacy are back, US President Joe Biden on Thursday said his administration will repair the relationship with allies and engage with the world once again.

"We will repair our alliances and engage with the world once again, not to meet yesterday's challenges, but today's and tomorrow's. American leadership must meet this new moment of advancing authoritarianism, including the growing ambitions of China to rival the United States and the determination of Russia to damage and disrupt our democracy," Biden said in his remarks to State Department employees.

The US, he said, must meet the new moment accelerating global challenges — from the pandemic to the climate crisis to nuclear proliferation — challenging the will only to be solved by nations working together and in common. "We cannot do it alone," he said.

"We must start with diplomacy rooted in America's most cherished democratic values: defending freedom, championing opportunity, upholding universal rights, respecting the rule of law and treating every person with dignity. That is the grounding wire of our global power. That is our inexhaustible source of strength.  That is America's abiding advantage.

"Though many of these values have come under intense pressure in recent years, even pushed to the brink in the last few weeks, the American people are going to emerge from this moment stronger, more determined and better equipped to unite the world in fighting to defend democracy, because we have fought for it ourselves," Biden said.

In his maiden address to the employees of the State Department, the president said he has come to the building to send a clear message to the world: America is back. America is back. Diplomacy is back.

Biden said his administration will work with partners to support restoration of democracy and the rule of law, and impose consequences on those responsible.

"Over the past two weeks, I have spoken with the leaders of many of our closest friends -- Canada, Mexico, the UK, Germany, France, NATO, Japan, South Korea, Australia -- to begin reforming the habits of cooperation and rebuilding the muscle of democratic alliances that have atrophied over the past few years of neglect and, I would argue, abuse," he said.

America's alliances, he asserted are its greatest asset and leading with diplomacy means standing shoulder-to-shoulder with US allies and key partners once again.

"By leading with diplomacy, we must also mean engaging our adversaries and our competitors diplomatically, where it is in our interest, and advance the security of the American people," he said.

On day one of his presidency, Biden said, he signed the paperwork to rejoin the Paris Agreement on climate change.

"We are taking steps led by the example of integrating climate objectives across all of our diplomacy and raise the ambition of our climate targets. That way, we can challenge other nations, other major emitters, up the ante on their own commitments," he said, adding that he will be hosting a climate leaders' summit to address the climate crisis on Earth Day this year.

"America must lead in the face of this existential threat. And just as with the pandemic, it requires global cooperation. We have also re-engaged with the World Health Organization. That way, we can build better global preparedness to counter COVID-19, as well as detect and prevent future pandemics, because there will be more," he said.

Biden said he has elevated the status of cyber issues within the government, including appointing the first Deputy National Security Advisor for Cyber and Emerging Technology.

"We are launching an urgent initiative to improve our capability, readiness and resilience in cyberspace," he said as he announced additional steps to course-correct foreign policy and better unite democratic values with diplomatic leadership.

To begin with, Defense Secretary Lloyd Austin will be leading a Global Posture Review of forces so that US military footprint is appropriately aligned with foreign policy and national security priorities.

"While this review is taking place, we will be stopping any planned troop withdrawals from Germany.

"We are also stepping up our diplomacy to end the war in Yemen -- a war which has created a humanitarian and strategic catastrophe. I have asked my Middle East team to ensure our support for the United Nations-led initiative to impose a ceasefire, open humanitarian channels and restore long-dormant peace talks," Biden said.

The US, he said is ending all American support for offensive operations in the war in Yemen, including relevant arms sales. Biden administraiton had already announced that was pausing some of the billion-dollar arms deals with Saudi and UAE. UAE is an important partner of Saudi in its Yemen offensive. "At the same time, Saudi Arabia faces missile attacks, UAV strikes and other threats from Iran-supplied forces in multiple countries. We are going to continue to support and help Saudi Arabia defend its sovereignty, territorial integrity and people," he said.

The efforts are being made to persuade those involved in the combat to end the conflict eventually. Yemeni activist Tawakkol Karman, a co-winner of the 2011 Nobel Peace Prize urged Biden to stay involved in Yemen peace efforts.