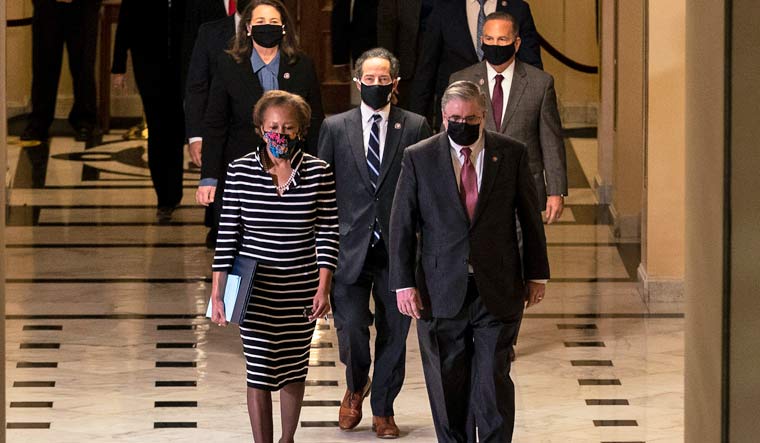 US House Clerk Cheryl Johnson, Representative Jamie Raskin (D-MD) and House Sergeant-at-Arms Tim Blodgett walk through the Capitol's Statuary Hall to deliver the article of impeachment for incitement of insurrection against former President Donald Trump to the Senate floor | Reuters

Current President Joe Biden, in the meanwhile, told CNN that the impeachment trial has to happen. If convicted, Trump will be banned from contesting for a political office. The trial is set to begin at on February 8. Senator Mitch McConnell on January 21 had asked for the impeachment trial to be pushed to February, so that the former president may have a chance to prepare a defence in his favour.

As the Republican party picks up pieces to sort itself out for the post-Trump era, the senators try to balance demands of deep-pocketed donors keen to distance themselves from Trump supporters.

Jumping in as the Republican party is torn due to divisive politics, Trump on Sunday, announced the possibility of launching a third political party—the Patriot party. Analysts have said that Trump might be doing so only to create fear among Republicans and prevent them from voting in favour of impeachment. His campaign in the meantime has distanced itself from claims that efforts are afoot to raise funds to form the new party.

On Monday, Democratic Maryland Representative Jamie Raskin stood before the Senate to read the House resolution charging high crimes and misdemeanours. Senate Majority Leader Chuck Schumer had said that failing to conduct the trial would amount to a get-out-jail-free card for others accused of wrongdoing on their way out the door, the AP reported.

Republicans opposing to the proceedings could be an indication that several senate lawmakers may vote to acquit Trump. Some Republicans scoff at the idea of conducting a trial even though he is no longer in office. It was decided on Monday that Senator Patrick Leahy would preside over the proceedings as Chief Justice John Roberts won't be available.