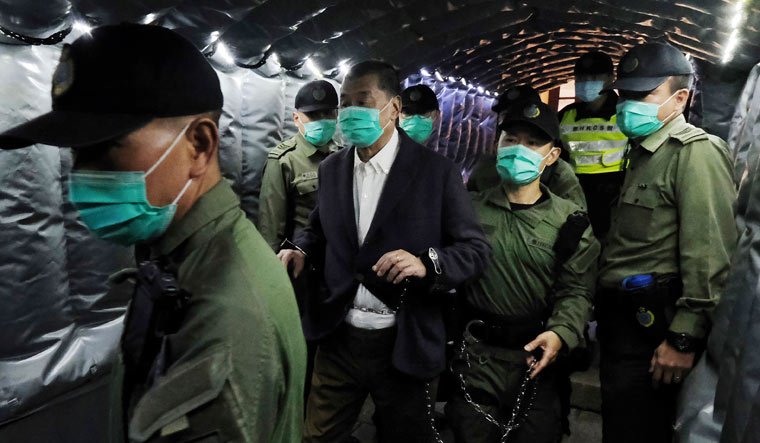 Hong Kong pro-democracy activist and media tycoon Jimmy Lai, center left, is escorted by Correctional Services officers to get on a prison van at the Court of Final Appeal in Hong Kong | AP

Hong Kong media tycoon Jimmy Lai has had his bail revoked. Prosecutors succeeded in asking the city’s highest court to send him back to detention.

Jimmy Lai, the Hong Kong billionaire, who had been arrested for taking part in Hong Kong protests in 2019, was granted bail on December 23. The media tycoon also faced charges of fraud.

Lai, who has an appeal hearing on February 1, resigned from the post of chairman of Next Digital, a media publishing company on December 30.

The court said that it was “reasonably arguable” that the previous judge's decision in granting Lai a bail was erroneous. When Lai was out on bail, he was prohibited from talking to the press, making public statements, using social media or meeting foreign officials.

In recent months, a few other pro-democracy activists and supporters were arrested by Hong Kong police, as a way to step up their crackdown on the pro-democracy movement that took place in 2019.

Lai could remain in custody till April 16, when he is slated for another court appearance.

The Chinese state-owned People’s Daily said that it would not be difficult for Lai to abscond, and called him “notorious and extremely dangerous.” The paper also warned that as per Article 55 of the nationals security law, Beijing could exercise jurisdiction over the came as it concerns offence endangering national security.