The FBI will give you $100,000 if you locate this Indian-American

Who is the Indian-American on the FBI’s Most Wanted list? 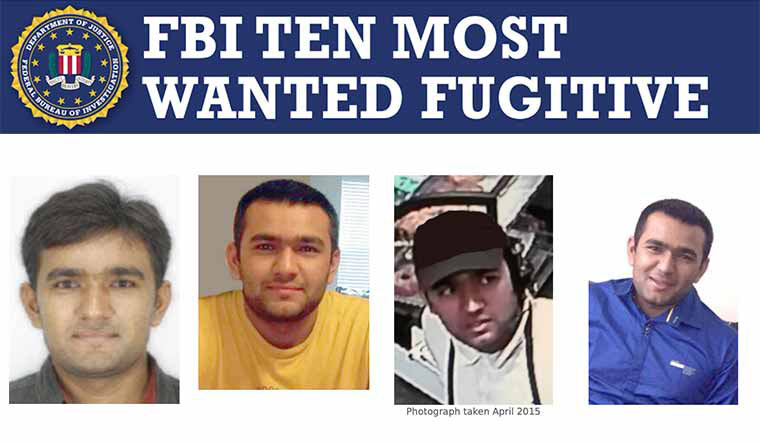 Bhadreshkumar Chetanbhai Patel, 30, has the dubious distinction of being the 514th person to make the FBI’s Top Ten Most Wanted Fugitives list, five years since he was accused of murdering his wife, Palak Patel, on April 12, 2015. This is the third year that he has been on the FBI’s Most Wanted list.

Last seen over five years ago in Newark, New Jersey, he remains on the run—and attracts up to $100,000 in reward money for information leading to this arrest.

“Patel is wanted for murdering his young wife two years ago at a donut shop at 7567 Arundel Mills Boulevard in Hanover [Maryland], where they both worked the night shift. Investigators believe Patel killed Palak, who was 21 at the time, in a back room just before midnight on April 12, 2015. Patel allegedly stabbed his wife multiple times and fled,” the FBI says.

“After leaving the donut shop, Patel walked across the street to the apartment he shared with his wife, retrieved a few items and some cash, and then hailed a taxi. The cab driver took him to a hotel in New Jersey near Newark Liberty International Airport. He checked in about 3 a.m. with no bags, just the clothes on his back. He checked out around 10 a.m., and took a hotel shuttle to Newark Penn Station. That’s the last anyone has seen of him.”

Patel was born in Kantrodi village in Viramgam, Gujarat. He married Palak in 2013 in what was an arranged marriage. Prior to her murder, Palak had reportedly told her parents she wanted to return to India, amid a strained relationship with her husband.

“The extremely violent nature of the crimes allegedly committed by Bhadreshkumar Patel earned him a place on the FBI’s Top Ten List,” said FBI Baltimore Special Agent in Charge Gordon B. Johnson. “The valuable assistance of the public cannot be overstated, as shown by the ongoing success locating fugitives placed on the Top Ten list. The ongoing efforts of our investigators, coupled with the public’s assistance, will lead to the capture of Bhadreshkumar Patel. We will never forget and will not rest until he is located, captured, and brought to justice.”

A local arrest warrant was issued in the District Court of Maryland for Anne Arundel County on April 13, 2014, and Patel was charged with first-degree murder, second-degree murder, first-degree assault, second-degree assault, and using a dangerous weapon with intent to injure. A federal arrest warrant was issued in the United States District Court, District of Maryland, Baltimore, Maryland, on April 20, 2015, after Patel was charged with unlawful flight to avoid prosecution.

The Anne Arundel State's Attorney's Office has also requested the help of INTERPOL in case Bhadreshkumar has fled the country, the Capital Gazette reported in 2015.

Investigators theorize that Palak Patel wanted to return to India—their visas had expired the month before—and her husband was against the idea. Investigators also believe that Patel could be with distant relatives in the U.S. or that he could have fled to Canada to return to India. Patel has ties to New Jersey, Kentucky, Georgia, Illinois, and India.

The FBI advises that anyone with information that could lead to his arrest (or the arrest of anyone on the Most Wanted list) call 1-800-CALL-FBI.