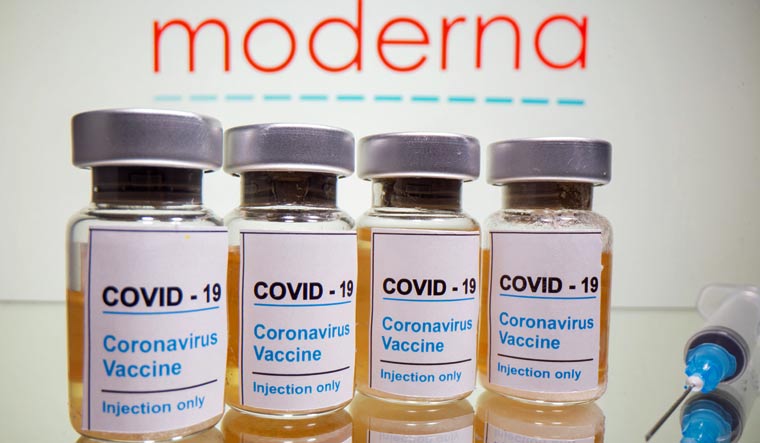 Vials with a sticker reading, "COVID-19 / Coronavirus vaccine / Injection only" and a medical syringe are seen in front of a displayed Moderna logo | Reuters

By the middle of 2021, there may be as many as ten effective COVID-19 vaccines, according to the head of the International Federation of Pharmaceutical Manufacturers and Associations (IFPMA).

“We will hopefully by the next summer have probably 10 vaccines which have proven their value. But all of them really need to be submitted by rigorous scientific scrutiny by the regulators,” says Thomas Cueni, IFPMA director-general.

Cueni noted that while vaccines from Pfizer, BioNtech, Moderna and AstraZeneca have all shown promising results in large clinical trials, there is still no question of “cutting corners”. He warned that it would be a mistake to lift patent protection for vaccines in order to allow compulsory licensing—where governments decide, usually in cases of emergencies, that a patented product can be manufactured domestically and/or used without the consent of the patent-owner.

Both Moderna and Gilead have said that they won’t enforce their coronavirus vaccine patents during the pandemic as they felt a “special obligation under the current circumstances”. For example, Gilead had issued low-cost license of Veklury(remdesivir) to generic manufacturers in several low and middle income companies, Biopharma Drive reported, after it struggled to match the initial demand for the drug.

At the World Trade Organisation, both India and South Africa have proposed allowing a temporary waiver to allow compulsory licensing for patented products during the COVID-19 pandemic. In 2019, Medicines sans Frontiers called compulsory licensing a “much needed and legally permissible tool” to overcome patent barriers where necessary.

Cueni, asked about the proposal, said: “For me this questioning of IP is really primarily politics, but it’s politics which is not helpful because it would send very negative signals in terms of disrespect to the system which allowed the world to react so fast and so responsibly.” He noted that vaccine makers often needed 50 quality assurance staff to make hundreds of checks during production

Cueni said that IFPMA archives showed there had never been a compulsory license granted for a vaccine and pointed to the difficult technology and know-how. Nearly every member company had committed to “not-for-profit” or socially responsible pricing during the pandemic, he added.

While several companies have signed a “no-profit pledge” regarding their vaccines, for the duration of the pandemic, these could expire as early as July 2021—depending on when the pandemic is believed to end.

In an analysis, Morgan Stanley had estimated that Pfizer and BioNtech alone could make up to $13 billion in sales from their vaccine sales worldwide.