Coordinated efforts will lead to faster recovery from pandemic: Modi at G20

Have a duty to rise to the challenge together: King Salman 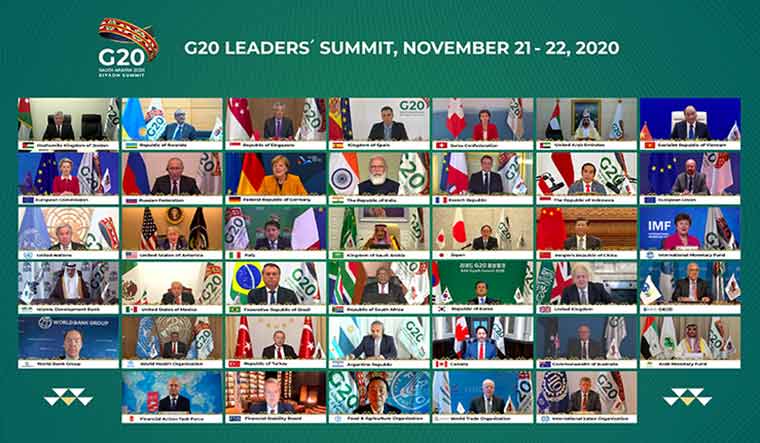 Speaking at the first virtual summit of the Group of 20 (G-20), Prime Minister Narendra Modi on Saturday joined host Saudi Arabia in calling for greater international cooperation in order to beat the coronavirus pandemic.

"Had a very fruitful discussion with G20 leaders. Coordinated efforts by the largest economies of the world will surely lead to faster recovery from this pandemic. Thanked Saudi Arabia for hosting the Virtual Summit," PM Modi tweeted after the summit.

"Transparency in our processes helps in inspiring our societies to fight crisis collectively and with confidence. Spirit of trusteeship towards planet Earth will inspire us for a healthy and holistic lifestyle," he added.

Modi said India had offered its "IT prowess" to further develop digital facilities for the G20's effective functioning. He said "work from anywhere" had become the new normal in the post-COVID world and suggested the creation of a virtual G20 secretariat.

Saudi Arabia's King Salman opened on Saturday the Group of 20 summit as the coronavirus pandemic overshadows this year's gathering of heads of state, transforming it from an in-person two-day meeting of the world's most powerful leaders to a virtual gathering of speeches and declarations.

On Saturday, a side event on pandemic preparedness was held on the margins of the Leaders’ Summit in order to "foster international cooperation and to find solutions that protect people’s lives and livelihoods".

The pandemic, which has claimed more than 1.37 million lives worldwide, has offered the G-20 an opportunity to prove how such bodies can facilitate international cooperation in crises but has also underscored their shortcomings.

The G-20's member-countries represent around 85 per cent of the world's economic output and three-quarters of international trade.

"We have a duty to rise to the challenge together during this summit and give a strong message of hope and reassurance," King Salman said in his opening remarks.

The kingdom, which assumed the G-20 presidency this year, is the host of the virtual summit that is bringing together leaders from the world's richest and most developed economies, such as the US, China, India, Turkey, France, the UK and Brazil, among others.

President Donald Trump is among those expected to participate in the closed-door virtual sessions that are taking place Saturday and Sunday.

The COVID-19 pandemic has been an unprecedented shock that affected the entire world within a short period of time, causing global economic and social losses, said the Saudi monarch, who convened G-20 heads of state for an emergency meeting in March as the coronavirus was fast-spreading around the world.

At the time, the recorded global death toll from the virus had just climbed past 22,000. G-20 leaders vowed to share information and the material needed for research, to exchange epidemiological and clinical data, and to strengthen health systems.

They also promised to work together to increase funding for vaccine research.

While quick research and sharing of scientific information for the development of COVID-19 tests and vaccines has happened, individual G-20 countries have mostly focused on securing their own vaccine supplies.

The Saudi monarch touted G-20 efforts to inject more than USD 11 trillion into the global economy this year as stimuli to support businesses and the most vulnerable.

He also commended the group for extending protections to those most impacted by the global economic recession, including a G-20 decision to suspend debt payments for the world's poorest countries until mid-2021 to allow those nations to focus their spending on health care and stimulus programs.

"I am confident that the Riyadh summit will deliver significant and decisive results and will lead to adopting economic and social policies that will restore hope and reassurance to the people of the world, " King Salman said.