OPINION:  Why rumours of a divorce is good news for Trump now 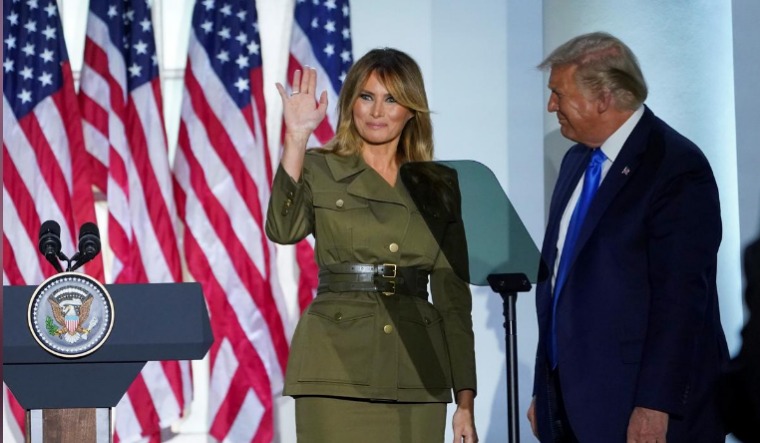 Melania Trump with US President Donald Trump at the RNC | Reuters

Since Trump’s defeat in the US presidential elections, rumour mills have been on overdrive about an impending divorce between the president and First Lady Melania. Has she batted his hand away in public? Yes, but so has he. Has she wiped her hand on her dress after batting his hand away? Yes, but so what?

Does that mean anything? In context, perhaps nothing. Melania has been a loyal soldier standing by her man in public events and campaign speeches. All couples have moments. Bad moments when they get on each other’s nerves. Good moments that inspire others to cheer.

Melania inspires a lot of people. Her husband does too. Together, they somehow managed to get 71 million people to vote for Trump in the elections. So, who says they are getting divorced?

One look at all the stories in the media, and something is clear. Most of the fuss comes from the comments of Trump’s former TV show star-turned-advisor-turned-nemesis Omarosa Manigault Newman. Eight out of ten stories rely on quotes from Omarosa.

Now, to be sure, Omarosa negotiated an appearance on Trump’s formerly highly-rated TV show Apprentice into a life-changing experience through her expert management of drama. She is good at producing juicy and salacious moments and information people want to consume.

Appearing on the Lorraine show on a renewed promotion of her book Unhinged, Omarosa told the host that what she has observed in the 17 years she has known the Trumps would “make your head spin” and that Melania was sometimes “repulsed” by her husband.

The story was quoted in the Daily Mail, which was then quoted by Raw Story, which in turn was quoted by Salon magazine with added comments where Omarosa said: “Melania is counting every minute until he is out of the office and she can divorce.”

In this manner, it seemed everyone is talking about an impending Trump divorce. But, Omarosa was not the only one stoking the fire. Former aide to Melania, Stephanie Wolkoff, is quoted by Express as having alleged that Melania is already negotiating a post-nuptial agreement.

The same Express website reported that Mika Brzezinski, a presenter of MSNBC’s Morning Joe, said she would not “put up with it” much longer, back in 2017. “She said she wanted to stay on ‘for her son’ and had the ‘worst job in the country’,” Brzezinski is quoted. “I haven’t talked to her in months, but if my gut is right, I don’t think she’s going to put up with it much longer. I know nothing. That’s just my instinct and I go with my gut and my gut’s always right,” Express quoted Brzezinski.

Add to that the countless videos of perceived hand-batting slights and — really — that is all we have. Now, even if all of that added up to divorce, here is why it is likely not imminent.

Though Trump lost the election, he gained millions of new voters, and with 71+ million Americans behind him, he is finding those numbers a strong negotiating position to try to shake the election results in his favour. The last thing he needs is Melania bailing out on him in the middle of it.

Even if he does not prevail in the changing the outcome of the electoral college, and he has to vacate the White House, indications are he is already setting up a Political Action Committee that would launch a 2024 bid to regain the White House.

And Trump knows that he — or any man in his place, appealing to the audience he appeals — would need a beautiful, blonde (if tinted), shapely wife by his side, lest he lose the support of the “family values” crowd.

Trump values loyalty and people keeping in line. Melania is no fool. And she will know that is no time to bail out. Perhaps she does not want to.

So, why is the talk of divorce good for Trump? It is the perfect foil for Trump, and Melania, to emphasise the fake label they have pinned on the press, while at the same time benefiting from the distraction value of juicy stories to take people’s eyes off the events in front of them, giving the Trump camp the time to jockey for a better position while everyone is so focused on the divorce drama.

Omarosa, Wolkoff, and Brzezinski too are the perfect foils, easily accused of being disgruntled, of holding a grudge, or making the Trumps the victims, the type of thing that makes Trump supporters rally behind him.

Perhaps no one knows where all of the post-election manoeuvring is going. Perhaps we will never know what Trump’s great strategy is. But one thing cannot be denied. Trump knows a good foil and he is not one to waste a valuable setup in front of him.

Disclaimer: The opinions expressed by the author are his own and do not purport to reflect those of THE WEEK