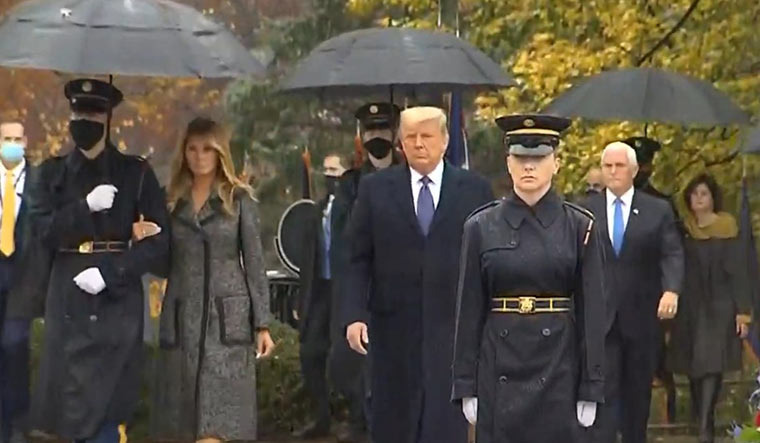 To mark Veteran’s Day, US President Donald Trump made his first public appearance since his election defeat (as called by news agencies), appearing at the Arlington National Ceremony to honour the Tomb of the Unknown Soldier.

Trump was accompanied by First Lady Melania Trump, and did not issue any statement about the election at the event—a separate post published on the White House website proclaimed how Trump had "relentlessly fought to support America’s veterans" and that "for far too long, our Government had not fully met its obligation to provide for 'him who shall have borne the battle, and for his widow and his orphan.'"

However, earlier in the day, he continued his Twitter storm at the election results, this time targeting Al Schmidt, Philadelphia’s Commissioner, who Trump said was being used “big time” by the “Fake News Media” to call the election in the city honest. “He refuses to look at a mountain of corruption and dishonesty. We win!” Trump tweet read, which was flagged by Twitter, as many of his tweets since the election have been, with the disclaimer “This claim about election fraud is disputed”.

Trump’s refusal to concede has worried observers who fear it may affect Biden’s ability to smoothly transition to a new government. Formally, the next President is appointed by the Electoral College on January 20.

President-Elect Biden too marked Veteran’s Day, visiting the Korean War Memorial in Philadelphia. Biden’s son, Beau, was a major in the Delaware Army National Guard, and passed away in 2015 from brain cancer.

Seeking to avoid clashing too strongly with President Trump prior to the handover of power, the President-Elect nevertheless termed Trump’s refusal to accept the election results as “inconsequential”.