'India has strong cultural and historical ties with SCO countries' 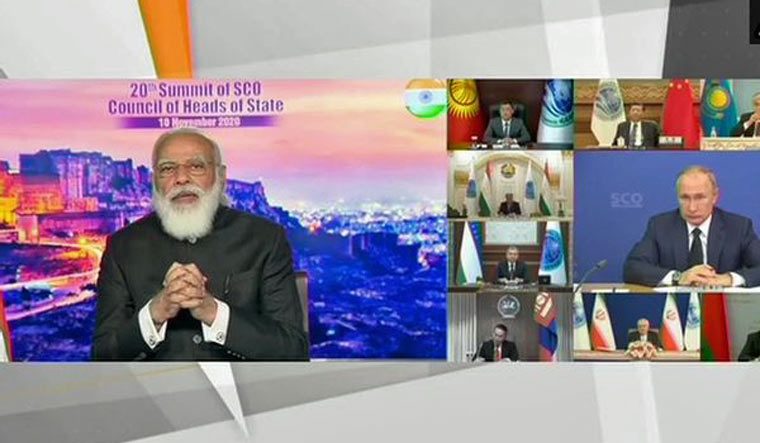 PM Narendra Modi met with leaders from China, Pakistan and including Vladimir Putin of Russia for the Shanghai Cooperation Organisation's (SCO) virtual meet.

“In this difficult time of the unprecedented epidemic, India's pharma industry sent essential medicines to over 150 nations,” PM Modi said during his address at the SCO summit.

He was joined by leaders from Kazakhstan, Kyrgyzstan, Tajikistan and Uzbekistan and four observer countries – Iran, Afghanistan, Belarus and Mongolia. "India has strong cultural and historical ties with SCO countries. India believes that to enhance connectivity it is important that we move forward while respecting one another's sovereignty and territorial integrity," Modi said. The leader from every participant country will talk for 10 minutes.

“We have always raised our voice against terrorism, smuggling of illegal arms, drugs and money laundering,” Modi said.

“As world's largest vaccine producing country, India will use its capacity to help entire humanity in fighting the crisis,” he went on to say.

“It is unfortunate that repeated attempts are being made to unnecessarily bring bilateral issues into the SCO agenda,” Modi said, talking about the military stand-off between India and China. This is the first time since the Galwan clash in June that the leaders have come face to face.

“India has always been resolute in working in sync with principles laid out in SCO charter,” he added.

Chinese Premier Xi Jingping, in turn, said that members of the SCO should deepen mutual trust and resolve disputes and differences through dialogue and consultations, while firmly dealing with terrorist, separatist and extremist forces.

Xi said that history has proved and will continue to prove that good, neighbourly friendship will go beyond a beggar-thy-neighbour approach, mutually beneficial cooperation will take over the zero-sum game and multilateralism will prevail over unilateralism.

"We need to deepen solidarity and mutual trust and resolve disputes and differences through dialogue and consultations," Xi said in remarks in the backdrop of the over six-month-long border standoff between India and China in eastern Ladakh. "We need to act on the vision of common, comprehensive and sustainable security, address all forms of threats and challenges effectively and foster a sound security atmosphere in our region,” he said.

Countries of the SCO should "resolutely oppose external forces' interfering in their internal affairs under any pretext," Xi said.

In order to cement the political foundation for SCO development it is important to foil “terrorist, separatist and extremists attempt to exploit the pandemic for disruption, curb the proliferation of drugs, crackdown on internet-based propagation of extremist ideology and deepen SCO members law enforcement cooperation,” he said.

"It is import we support biosecurity, data security and outer space security and engage in active communication and dialogue in this field”, he said.