Both men were carrying loaded handguns 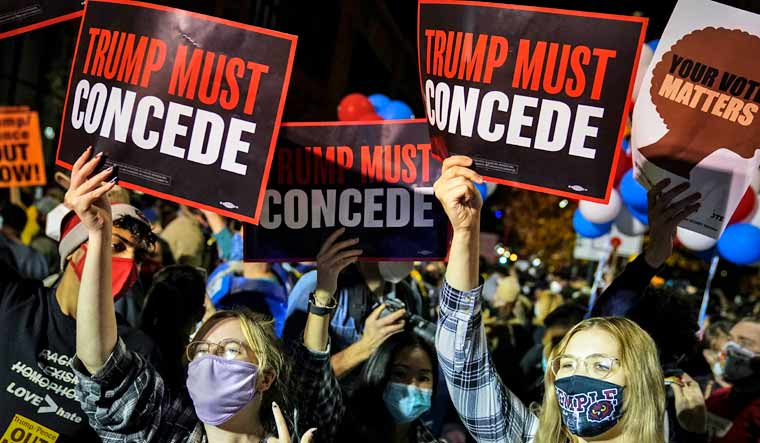 Two heavily armed men "coming to deliver a truck full of fake ballots" have been arrested near the Philadelphia convention center where election workers were counting votes from the undecided US presidential election, police said.

Antonio LaMotta, 61, and Joshua Macias, 42, both of Chesapeake, Virginia, were arrested on Thursday night outside the center on suspicion of carrying handguns in Pennsylvania state without permits, according to US media reports.

Philadelphia police said they found the men on Thursday night after receiving a tip that people with firearms were heading to the Pennsylvania Convention Center in a silver Hummer truck.

Both men were carrying loaded handguns, and police found an AR-type rifle in the Hummer, authorities said at a news conference on Friday.

About 160 rounds of ammunition were found in the weapons and the vehicle, authorities said.

Details about the alleged fake ballots — including where they came from, whether they were found in the Hummer, or what was marked on them — were not immediately available, CNN reported.

It's unclear what those men were allegedly intending to do. The FBI and Philadelphia Police are investigating the incident, CBS News reported.

Prosecutors say text messages show the men say they were concerned about the vote counting happening at the Convention Center and they were "coming to deliver a truck full of fake ballots to Philly."

The vehicle with Virginia tags was found unattended on the 200 block of North 13th Street in Center City.

A few minutes later, officers stopped two armed men on the street. Police say they did not have a license to carry in Pennsylvania and were placed under arrest.

Stickers and a hat with logos of the far-right QAnon conspiracy movement were found in the vehicle, Philadelphia District Attorney Larry Krasner said.

I don't have information that any of them are known members of an extremist group, Krasner said.

The two men were charged with having a concealed firearm without a license and carrying a firearm on a public street or public property, Krasner was quoted as saying by CNN.

LaMotta and Macias were arraigned on Friday night, and a judge set bail at $750,000 each, Krasner's spokeswoman Jane Roh said.

"This alarming incident is still very much under investigation regarding additional charges," Krasner said.

A woman who was traveling with the men has not been arrested, Krasner said.

The ongoing ballot count in Pennsylvania, and Philadelphia in particular, has eroded President Trump's lead over former Vice President Joe Biden in the key battleground state.

On Wednesday, Trump was leading Biden by hundreds of thousands of votes in Pennsylvania. Just before midnight on Thursday, the president's lead shrank to around 24,000.

The election could hinge on the outcome there, with 20 Electoral College votes at stake.

The Trump campaign has filed at least five lawsuits in Pennsylvania as of Thursday in connection with disputed ballots and deadlines, Fox News reported.

Tensions were high outside of the Pennsylvania Convention Center all day on Thursday as supporters of Trump, a Republican, and his Democractic rival Joe Biden protested.

Separated by barricades, Trump supporters on one side chanted, Four more years! and Biden supporters chanted "Count every vote!"