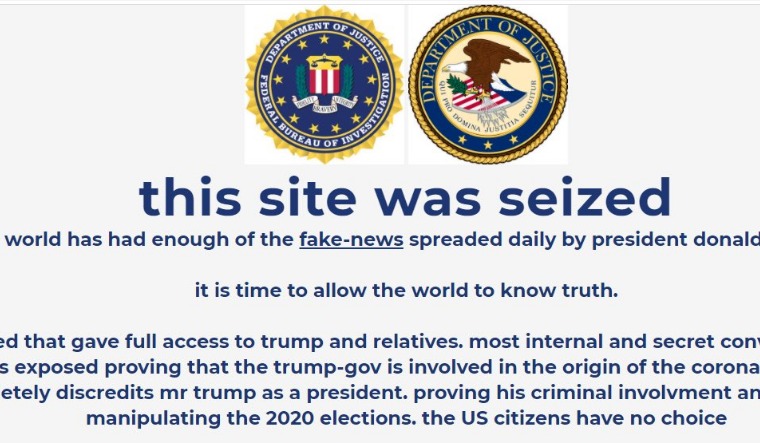 The website for the re-election campaign of US President Donald Trump was briefly hacked late on Tuesday evening.

Tim Murtaugh, the Trump Campaign's communications director, acknowledged the incident in a statement. Murtaugh tweeted, "Earlier this evening, the Trump Campaign website was defaced and we are working with law enforcement authorities to investigate the source of the attack. There was no exposure to sensitive data because none of it is actually stored on the site. The website has been restored."

Screenshots of the incident showed a message stating "this site was seized". The hackers wrote, "The world has had enough of the fake-news spreaded daily by president donald j trump. it is time to allow the world to know truth."

The message claimed Trump's government "is involved in the origin of the coronavirus". The hackers claimed to have evidence that "completely discredits" Trump and "prove his criminal involvement" and cooperation "with foreign actors".

The hackers also posted a link to two cryptocurrency wallets, linked to Monero, a cryptocurrency that is considered difficult to trace. Those reading the message were asked to donate to either of the wallets to cast a vote on whether the hackers should share the data they claimed to have on Trump. “After the deadline we will compare the funds and execute the will of the world, in both cases we will inform you,” the hackers wrote.

Tech website Tech Crunch reported, "The culprits likely gained access to the donaldjtrump.com web server backend and inserted a long stretch of obfuscated JavaScript producing a parody of the FBI 'this site has been seized' message, which appeared over the normal content."

Tech Crunch speculated the hacking was unlikely to have had foreign origins, despite the apparent use of broken English.

"Getting people to irreversibly send cryptocurrency to a mysterious address is a common form of scam online, usually relying on brief appearances on high-visibility platforms like celebrity Twitter accounts and the like. This one is no different, and was taken down within minutes. There is no indication that this attack was in any way state-sponsored, and while it strikes a partisan tone, one can hardly say that this is a very coherent attack against the Trump platform,” Tech Crunch reported.

Ironically, the Twitter handle of Joe Biden, Trump's Democratic rival in the presidential polls, was among those targeted in a massive cryptocurrency scam in July.