About 5.2 million Americans cannot vote due to felony records

Racial discrepancies are reflected in the disenfranchising of individuals 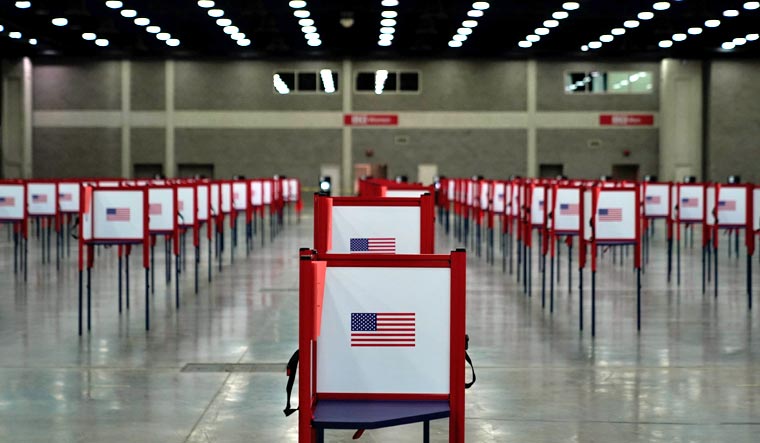 Voting booths stand on the floor of the Expo Center on the day of the primary election in Louisville, Kentucky, U.S. June 23, 2020 | Reuters

Date of the American elections is just around the corner. 62 million Americans have cast early ballots. This gives hope to experts and citizens who expected a low turnout due to the coronavirus pandemic. This also is an improvement from the 58.3 million who cast their votes early in the 2016 elections-- 42 per cent of the total ballots cast.

For example in Alabama, formerly incarcerated people do not automatically regain their right to vote, even if they are done serving their sentence. In Alabama alone, more than 8 per cent of the voting-age population and more than 14 per cent of Black adults are disenfranchised.

In Maine and Vermont, people can vote from prison. But, in Mississippi, and Tennessee one cannot vote even if you are done serving your sentence. Racial discrepancies are reflected in the disenfranchising of individuals. As per a Vox report, more than one in ten Black American cannot vote in Alabama, Arizona, Florida, Iowa, Kentucky, Mississippi, Nebraska, South Dakota, and Virginia. The ratio is more than one in five in Tennessee.

In 2018, voters in Florida passed Amendment 4, which allowed those who finished serving their sentence to vote. But even then, about 900,000 Floridians cannot vote because of fines and court fees they have to pay to reinstate their right to vote.

On October 13, when Amy Coney Barrett was asked about voting rights of felons, she said she believes states have the freedom to deprive felons of the right to vote, but she did not explicitly state whether or not the practice is right.

This surely paints a grim picture of voting rights in the US, despite the progress made in recent years.