Hungary: Thousands of students march with torches for academic freedom

The government has been transferring ownership of universities to private foundations 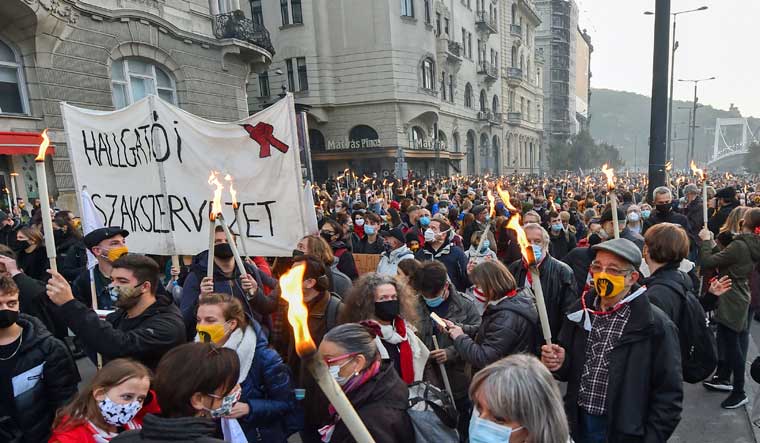 Thousands of Hungarians marched on the streets of the Budapest on Friday to protest government actions they claim strips one of the country's most prestigious universities of its independence.

Students from Hungary’s University of Theatre and Film Arts (SZFE) and other universities view the government's moves will undermine its academic freedom. Students feel that a government-appointed board will deprive the school of its autonomy
The march follows weeks of organised protests by students at the University for Theater and Film Arts in Budapest and falls on the national holiday commemorating the anti-Soviet uprising of 1956.

“We welcome all who want to express their concerns over the threat to universal values in our country ... autonomous higher education is only one of those values,” the students posted on Facebook. Several students held up torches and signs that read, “Free country, free university” and “Art is free.” They walked across a bridge over the Danube in twilight towards the university.
The Hungarian legislation ruled by the right-wing Fidesz party, transferred ownership of the university to a private foundation. PM Viktor Orban's nationalist government, over the last few years, has transferred ownership of several universities to private foundations. These private foundations are ruled by boards of directors, who are loyal to the government.

Critics of the move agree with the students that these changes limit the schools' autonomy and bring them ideologically closer to the government, while the government says the new structure will increase educational quality and make the institutions financially independent.