No casualties or major damage has been reported on either side 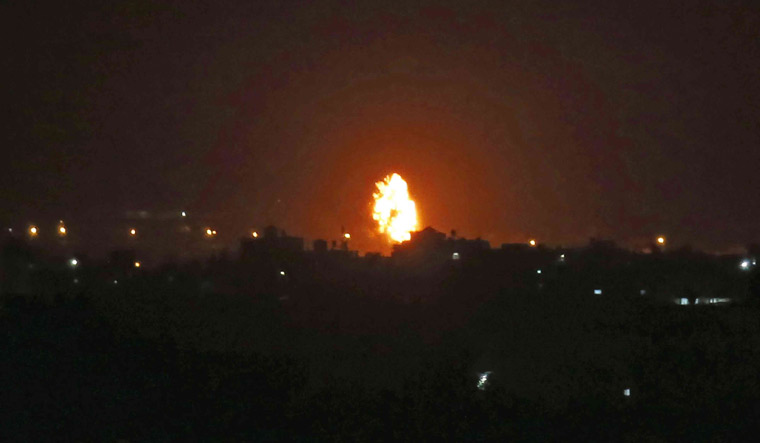 Flames are seen following an Israeli air strike in the town of Khan Yunis, in the southern Gaza Strip | AP

The Israeli Defence Forces (IDF) launched overnight airstrikes at the Gaza Strip after Palestinian militants fired two rockets. No casualties or major damage has been reported on either side.

Late on Thursday night, Palestinian militants fired two rockets into Israel, one of which was intercepted by Israeli missile defences, while the other fell in an open area.

The Israeli military said fighter jets and other aircraft struck a weapons manufacturing site and underground infrastructure belonging to the Islamic militant group Hamas, which rules Gaza.
Following the rocket fire, Defence Minister and Alternate Prime Minister Benny Gantz during a stopover on his way back from meetings in Washington DC held a security consultation with security officials and MK Michael Biton who is serving in his place while he is outside of the country.

The IDF on Tuesday announced that it uncovered a Hamas attack tunnel inside Israeli territory that had been dug from the Gaza Strip. Tensions in the south have climbed due to this. The tunnel extends from the southern Gaza city of Khan Younis toward the Israeli community of Kibbutz Kissufim.
The sensor-studded barrier identified an anomaly on Monday and military engineers confirmed that it was a tunnel the following day. An IDF spokesperson said the tunnel ran dozens of meters underground and was intended to facilitate attacks.

Three wars have been fought between Israel and Hamas since the militant group seized power from rival Palestinian forces in 2007.
Hebrew media has been reporting in recent weeks that Qatar is close to reaching a deal to resume supplying tens of millions of dollars in monthly cash transfers to Gaza, to help keep a lid on internal pressures.
Israel and Egypt have maintained a crippling blockade on the coastal territory, which is home to 2 million Palestinians since Hamas seized power, an AP report reads.