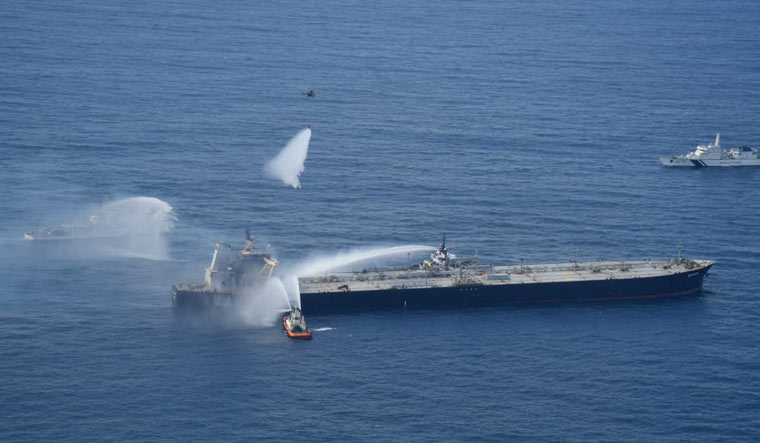 A Sri Lankan Navy boat sprays water on the New Diamond, a very large crude carrier (VLCC) chartered by Indian Oil Corp (IOC), that was carrying the equivalent of about 2 million barrels of oil, after a fire broke out off east coast of Sri Lanka September 6, 2020 | Sri Lankan Airforce media/Handout via REUTERS

A Sri Lankan court on Monday barred the captain of the Greek-owned oil tanker that caught fire off Sri Lanka's eastern coast from leaving the country.

The magistrate's court in Colombo, however, declined to issue a remand order on Steiros Illias, the captain of the Panama-registered tanker MT New Diamond that went up in flames on September 3 while carrying 2 million barrels of crude oil from Kuwait to India.

The deputy solicitor general had requested for a remand order as the captain was needed to file an indictment in the high court.

The court barred him from leaving the country as he was needed for further proceedings.

The captain appeared in the court after the attorney general directed police to record his statement.

He was to be charged for committing offences under the Marine Pollution Environmental Protection Act.

The next hearing in the case is on October 12.

On Saturday, the owner of ship, Greece-based Porto Emporios Shipping Inc., agreed to pay USD 2.3 million to Sri Lanka for the costs incurred on dousing the fire on board the tanker.

The deputy solicitor general told the magistrate that oil had leaked from the tanker polluting the sea. At least two nautical miles had been affected by the oil seepage.

New Diamond, a vessel under charter by the Indian Oil Corporation, was carrying 270,000 metric tonnes of crude oil from Mina Al Ahmadi port in Kuwait to the Indian port of Paradip when a boiler explosion in its engine room caused a fire off the coast of Sangamankanda in Ampara district.

The fire killed one Filipino crew member and injured another, while 21 other crew members escaped uninjured.

The Sri Lanka Navy with the help of Indian counterparts and coast guard doused the fire after a much effort.

The ship is currently in the seas 70 nautical miles east of Batticaloa in the east and 129 kilometers away from the Batticaloa coast.