'Afghan women worry that they will be marginalized' 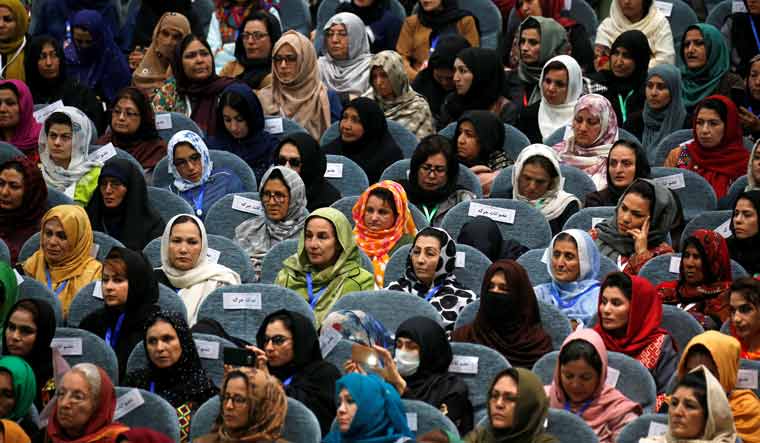 On September 18, President Ashraf Ghani signed a law amendment that will allow Afghans to have their mother’s names printed on their national identity cards. There has been a campaign to bring about this change for a long time.

Until now, only fathers names were allowed to be recorded on ID cards and using women’s names is traditionally frowned upon. The move comes at a time when the Taliban and the Afghan government have initiated peace talks. And during the talks, four Afghan women made sure their voices were heard.

While under the Taliban regime, women were threatened with dismemberment for wearing nail polish or lipstick; they were publicly flogged for breaking the dress code and weren’t allowed to leave their homes without a male companion. There is fear that these regressive norms could return if the Taliban takes a seat of power. What do women make of the peace talks? What is to be the expected outcome and how will it affect women?

“The Taliban had taken over when I was six years old. We had our fall-winter break. I was waiting for the spring semester to begin. After three weeks, I asked my father to take me to school. When we went, we saw that the school was shut down— everything was empty— I cried a lot. My father moved us to Pakistan, where I finished middle school and came back to Afghanistan in 2002,” says Mariam Atahi, a women’s rights activist based in Kabul, Afghanistan.

Atari, who holds a masters degree in Peace and Reconciliation, says, “I could continue my education because we were lucky and could move to Pakistan. But, there are tens of thousands of girls who haven’t be able to do so.”

Atahi says she is concerned about the outcome of peace talks between the Afghan government and Taliban. According to her, considerable progress has been made in women’s rights. But she hopes that “women’s political participation increases and that there is the participation of various ethnic groups that live in Afghanistan,” even after talks between the government and the Taliban.

Hikmat Noori an independent journalist and an advocate of women’s rights said, “Twenty years ago if you were a woman in Afghanistan, you could be beaten for laughing in public or flogged publicly for leaving your home without a male guardian. But since the fall of the Taliban regime and the establishment of the new government, Afghan women's rights have become a symbol of progress and development. let’s not forget the positive impact of the international community's efforts in Afghanistan. Over the past two decades, many laws, policies and strategies have been developed by the Afghan women such as the National Action Plan for Afghan Women, National strategy for combating violence against women. More recently they secured the rights to include mothers' names on children's National ID. So these changes do improve the situation of Afghan women and help move towards equality among Afghans.”

As per a randomised controlled trial of 932 women in February 2019, 14 per cent of women experienced violence from their mother-in-law, while 23 per cent experienced physical violence from their husbands in the last 12 months. As per the Afghanistan Women Affairs Ministry, there have been more than 6,500 instances of violence against women in the country between 2018 and 2019. And in most cases, the violence is inflicted upon by family members in form of sexual abuse in forced marriages to honour killings. Women are also denied rights like inheritance and education, which are guaranteed to them by the government.

Noori however feels, and Atahi agrees, that many issues still need to be worked on, including domestic violence and certain regressive practices that hold women back or discriminate against them. Atahi hopes after the talks conclude, no youth or children would need to face violence or grow up in the face of violence.

According to Atahi, there are women in high-ranking positions in President Ashraf Ghani’s cabinet. But, women’s involvement in politics needs to increase.

“I personally think one of the most important things that women have been able to do alongside men in the last two decade is joining in the Afghan security forces in fighting for security and stability of Afghanistan, Noori says.

About fears surrounding what will happen to women’s freedom if the Taliban does become part of the government, he says, “I am personally very sceptical about their arrival. I am scared of my sisters being beaten for something as trivial as going to the hospital by themselves. I am scared for my niece who may not get access to proper schooling and education. Although there are optimisms about peace agreements between the Taliban and the Afghan government, I also see and hear many concerns. Afghan women worry that they will be marginalized in the agreement and that the Taliban will re-establish their old ways as soon as they reach an agreement with the government. They worry that women will not be allowed to work or get outside the house without a male guardian.”

The Taliban has indicated that they will adopt a less draconian stance toward women and women’s rights than before. The militant group has said that they would protect women's rights under Islamic Sharia law. And while details on the same aren’t available, they have indicated that the system will be different than ones in place in Saudi Arabia and Iran.

On Wednesday, US envoy to Afghanistan Zalmay Khalilzad faced tough questioning from Democrats on women’s rights amid talks between Taliban and the Afghan government. Stephen Lynch, chairman of the House Oversight Subcommittee asked Khalilzad, “How do we demonstrate to the Taliban that the status of women and girls is a major priority in restoring that country's stability...when we don't list it as a priority in our negotiations but instead, leave it to the Afghans to fight that fight?”

Khalilzad assured Lynch that women’s rights were a top priority for the US, but acknowledged that the country’s political future would be determined by talks between the Taliban militants and an Afghan government-led delegation.

Khalilzad also said that the US hadn’t abandoned the cause of women’s rights in Afghanistan. The US-Taliban agreement that stipulates that American troops will withdraw from Afghanistan as long as Taliban renounced terrorism and agreed to have direct peace talks with the Afghan government had not discussed women’s rights.

Atahi on the other hand feels that the situation may not be completely reversed if the Taliban does become part of the government. And if personal freedom is attacked, “women in Afghanistan won’t give up without a fight,” she says. Talking of personal freedom she says, “even something as simple as wearing a hijab or not, is a personal choice— it has never been enforced by a family member or the police. But this wasn’t the case when the Taliban was powerful.”

While both the Afghan government and the Taliban follow the Hanafi school of jurisprudence within Sunni Islam, their interpretation of Shari’a are vastly different and this could pose a possible problem for both sides to agree on matters regarding civil as well as women’s rights.