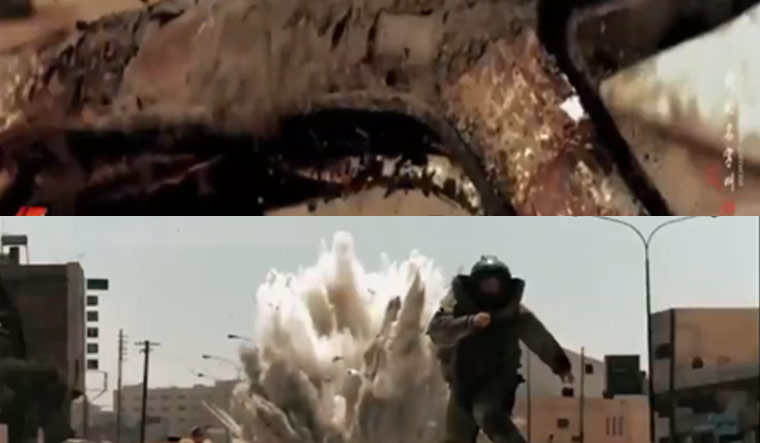 Collage: The scene on top was shown in the video showing a PLAAF air strike and was taken from The Hurt Locker, the scene below was the frame a few seconds later in the original film | Twitter user W.B. Yeats

With China engaged in a tense border stand-off with India on its western front and in repeated disputes with its neighbours in the South China Sea as well as with the United States, the country’s propaganda machinery has frequently churned out videos purporting to show the might of the Chinese armed forces.

A recently-released video, which purported to show Chinese nuclear capable H-6 bombers launching an attack on an island resembling the US territory of Guam, has now been dissected by social media users who noticed that it used footage from Transformers: Revenge of the Fallen, The Rock and The Hurt Locker.

Below is the clip showing footage taken from the 2008 Oscar-winning war thriller The Hurt Locker.

Yet, they directly copied some shots from American movie, The Hurt Locker.

Another shot of a missile being fired was lifted from Transformers: Revenge of the Fallen. Footage of an explosion was taken from The Rock (1996).

Someone discovered that certain scenes in the PLAAF H-6K propaganda video, released on Weibo, were lifted from Hollywood movies. 😂🤣

This speaks volumes about China’s respect for intellectual property as well as China’s creativity, or lack thereof. pic.twitter.com/qCkPiPTvUw

The lifting of footage from Hollywood was noticed on Chinese social media as well, with several users commenting on it. According to the South China Morning Post, this has been common practice to make productions look 'spectacular'.

China has released several videos recently purporting to show off its military might, with videos often set in different locations depending on the country China has tensions with.

China released a similar video showing its Eastern Theater Command fighting in desert, jungle and other battlefield scenarios, with the statement, “If war breaks out, this is our answer!”.

In addition, Global Times also released footage of Chinese mine-sweeper ships performing operations in the Taiwan straits as they claimed Taiwan was attempting to deploy sea mines in the region.