Afghan women make themselves heard at negotiations with the Taliban 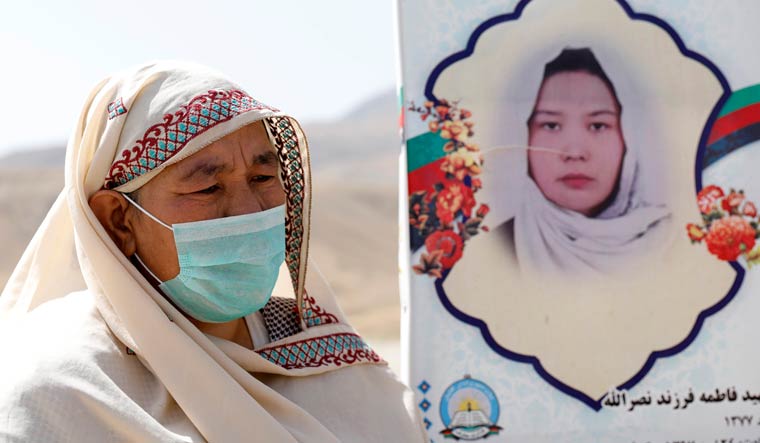 A woman sits next to the grave of her daughter who was killed in a suicide attack in an educational centre two years ago, as Afghan government officials and the Taliban hold talks in Doha aimed at ending 19 years of war in the country, in Kabul, Afghanistan September 14, 2020 | REUTERS/Mohammad Ismail

Four women from the Afghan government’s 21-member team that is holding peace talks with the Taliban delegation on Thursday said, “We are here to tell the Taliban that it has to face, respect and accept the new Afghanistan.”

Women in Afghanistan have been living in fear ever since Taliban rule had taken over in 1996. Women were threatened with dismemberment for wearing nail polish or lipstick; they were publicly flogged for breaking the dress code and weren’t allowed to leave their homes without a male companion.

“We don’t read any books, but talk about what we’ve been through; what we women experienced under the Taliban from 1996 to 2001. We faced systematic discrimination when women were not treated as human beings. A girl couldn’t go to school, our clothes were checked, a woman couldn’t even see a doctor without a male companion. But now the Taliban must understand that things have changed, ” Fawzia Koofi, a member of parliament from Badakhshan province who is also deputy speaker of parliament was quoted as saying in a Reuters report.

It was the first time that women were represented in negotiations with the Taliban. Fawzia Koofi, who set up a home school for girls during the Taliban regime, later was the face behind ‘Back to School’ campaign for girls in 2001.

Habiba Sarabi, a former minister and teacher said, “I want to forget those horrifying times of how women lived under the Taliban, but some things in life are impossible to forget. We had no rights, we could not go out without mahram (male companion). My daughter was in grade 5 when her schooling was stopped. And it was for her education that I moved to Pakistan. I had to leave my beloved country because the Taliban stopped my daughter’s schooling."

"Today, she holds three degrees from Germany, US and India; has worked for Afghanistan’s Finance Ministry and is now with the UN. This is the girl the Taliban had stopped.”

Sharifa Zurmati, former advisor and spokesperson of the Ministry of Women’s Affairs, radio journalist and broadcaster from Paktia province said women aren’t keen for a repeat of the atrocities that took place under the Taliban.