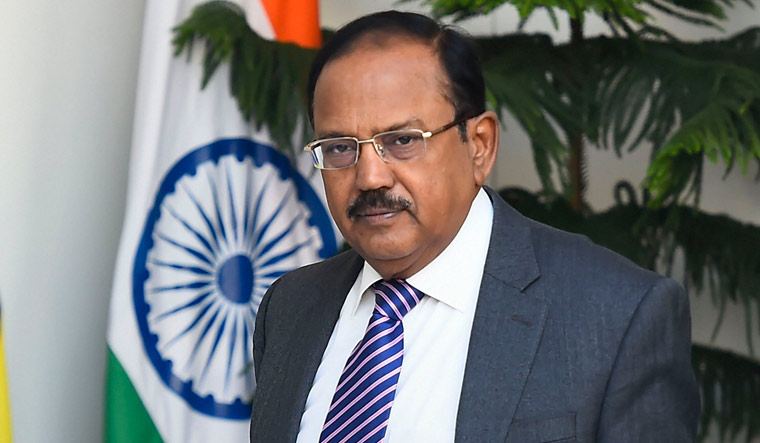 Hostilities between India and Pakistan have spilt out in yet another multilateral grouping, the Shanghai Cooperation Organisation (SCO).

On Tuesday, India took umbrage when, during the virtual meeting of the National Security Advisers (NSAs) of the member states, the Pakistani NSA Moeed Yusuf "deliberately projected a fictitious map that Pakistan has recently been propagating".

Indian NSA Ajit Doval walked out of the meeting when he saw Yusuf displaying the new map of Pakistan that the Imran Khan government released some weeks ago. The map includes Kashmir, as well as Junagadh and Manavadar in Gujarat as part of Pakistani territory.

A statement issued by the Ministry of external affairs (MEA) said that the Pakistani act was in "blatant disregard to the advisory by the host [Russia] against it and in violation of the norms of the meeting.'' Refuting comments coming from across the border, India added that Doval had consulted the host before exiting the meeting in protest. "As was to be expected, Pakistan then went on to present a misleading view of this meeting."

Government sources say that the Russian side tried very hard to persuade Pakistan not to display the map. Nikolai Patrushev, secretary, National Security Council of the Russian Federation has conveyed that he was personally very grateful to Doval for attending the SCO meet. Russia does not support what Pakistan has done, said sources, adding that Russia hopes that Pakistan's provocation will not affect India's participation at the SCO and neither cast a shadow on Patrushev's warm and personal relationship with Doval.

Both India and Pakistan joined this multilateral body, which comprises eight nations, in 2017. India was brought in by Russia, Pakistan by China. Though the SCO does not allow for bilateral issues and quarrels to be brought to the table, India's increasing hostility with both Pakistan and China will inevitably lead to instances such as what happened today. Some days ago, India decided not to participate in the joint military drills of the SCO. The official reason was the pandemic, but the tense situation with China in Ladakh and increasing irritations from Pakistan had a role in the decision, too.

India and China have used the sidelines of the SCO meetings to have bilaterals. Recently, external affairs minister S. Jaishankar and Chinese foreign minister Wang Yi met in Moscow on the sidelines of the foreign ministers' meet and came up with a five-point programme to reduce the tensions on the border. Earlier, defence minister Rajnath Singh had met his Chinese counterpart, Wei Fenghe, too, in Moscow. However, India and Pakistan have had no such bilaterals. Diplomatic ties between the two nations have been rapidly scaled down, and the high commissions of both countries maintain only a skeletal staff. Pakistan has the habit of needling India at international fora.

The hostilities between India and Pakistan were responsible for the South Asian Association for Regional Cooperation (SAARC) from becoming a largely defunct body, and India has now made it a policy to extend its regional outreach towards the east, with new groupings like BIMSTEC and the outreach to ASEAN.

How will the SCO handle these bilateral tensions? With India to take over as chair of the SCO in November, it is still not clear whether that summit will be a virtual one or a physical one. With India as host, tensions within the SCO could get even worse.