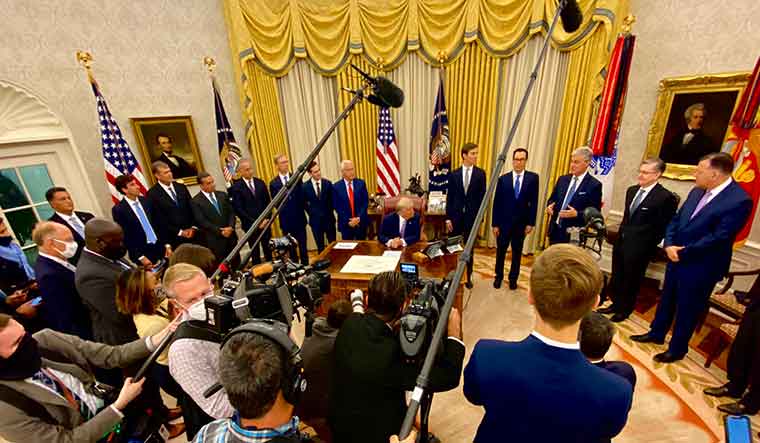 Israel and the United Arab Emirates will sign their historic deal normalising relations at a White House ceremony on September 15, news agencies reported.

Last month, US President Donald Trump had made a historic announcement that, after 49 years, the UAE and Israel would normalise relations in exchange for Israel’s withdrawal from parts of Palestine it was accused of annexing. Since the United Arab Emirates was founded, it has—along with most other nations in the Middle East—refused to recognise Israel. There were no direct flights between the two nations, Israeli citizens were not allowed to enter the UAE, and even international travellers who had an entry stamp from Israel would find themselves barred from entry.

Senior delegations from both countries will likely be led by Israeli Prime Minister Benjamin Netanyahu and Emirati Foreign Minister Mohammed bin Zayad, the brother of the UAE crown prince. The officials, who were not authorised to discuss the matter publicly and spoke on condition of anonymity, said the ceremony would either be on the South Lawn, the Rose Garden or inside depending on weather.

The ceremony will come just a month after the agreement to establish full diplomatic relations was announced on August 13.

The historic deal delivered a key foreign policy victory to Trump as he seeks reelection, and reflected a changing Middle East in which shared concerns about archenemy Iran have largely overtaken traditional Arab support for the Palestinians.

That announcement has been followed by the first direct commercial flight between the countries, the establishment of telephone links and commitments to cooperate in numerous areas.