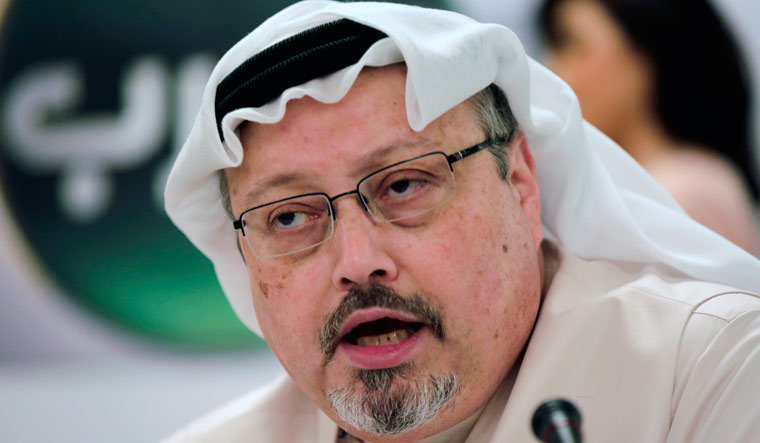 A Saudi court announced the final verdict on Monday in the case of slain Washington Post columnist and Saudi critic Jamal Khashoggi after his son, who still resides in the kingdom, announced pardons that spared five of the convicted individuals from execution. While the trial draws to its conclusion in Saudi Arabia, the case continues to cast a shadow over the international standing of Crown Prince Mohammed bin Salman, whose associates have been sanctioned by the US and the UK for their alleged involvement in the brutal killing, which took place inside the Saudi Consulate in Istanbul.

The Riyadh Criminal Court's final verdicts were announced by Saudi Arabia's state television, which aired few details about the eight Saudi nationals and did not name them. The court ordered a maximum sentence of 20 years in prison for the five. Another individual received a 10-year sentence, and two others were ordered to serve seven years in prison.

A team of 15 Saudi agents had flown to Turkey to meet Khashoggi inside the consulate for his appointment on October 2, 2018 to pick up documents that would allow him to marry his Turkish fiance, who waited outside. The team included a forensic doctor, intelligence and security officers, and individuals who worked directly for the crown prince's office, according to Agnes Callamard, who investigated the killing for the United Nations.

Turkish officials allege Khashoggi was killed and then dismembered with a bone saw inside the consulate. His body has not been found. Turkey apparently had the consulate bugged and shared audio of the killing with the C.I.A., among others.

Western intelligence agencies, as well as the US Congress, have said the crown prince bears ultimate responsibility for the killing and that an operation of this magnitude could not have happened without his knowledge.

The 35-year-old prince denies any knowledge of the operation and has condemned the killing. He continues to have the support of his father, King Salman, and remains popular among Saudi youth at home. He also maintains the support of President Donald Trump, who has defended US-Saudi ties in the face of the international outcry over the slaying.

Saudi Arabia's trial of the suspects has been widely criticised by rights groups and observers, who note that no senior officials nor anyone suspected of ordering the killing has been found guilty. The independence of the Riyadh Criminal Court has also been questioned.

Callamard, the UN special rapporteur who investigated Khashoggi's killing, told The Associated Press in a statement that the crown prince has remained well protected against any kind of meaningful scrutiny in his country and the high-level officials who organized the killing have walked free from the start.

These verdicts cannot be allowed to whitewash what happened, she said, calling on US intelligence services to publicly release their assessments of the crown prince's responsibility. While formal justice in Saudi Arabia cannot be achieved, truth telling can.

A small number of diplomats, including from Turkey, as well as members of Khashoggi's family, were allowed to attend the initial trial. Independent media and the public were barred.

Yasin Aktay, a senior member of Turkey's ruling party and a friend of Khashoggi, criticized the final court rulings, saying those who ordered the killing remain free while several questions concerning the journalist's death remain unanswered.

He also said there were questions as to whether those convicted in the killing are imprisoned.

According to what we have heard, those who were convicted are roaming freely and living in luxury, he said. The truth of the matter is this case should be tried in Turkey, not in Saudi Arabia.

Saudi Arabia has tried 11 people in total, sentencing five to death in December and ordering three others to prison for covering up the crime. The crown prince's senior advisors at the time of the killing, namely Saud al-Qahtani and intelligence officer Ahmed al-Asiri, were not found guilty.

The trial also concluded the killing was not premeditated. That paved the way for Salah Khashoggi, one of the slain writer's sons, to months later announce that the family had forgiven the killers, which essentially allowed the five to be pardoned from execution in accordance with Islamic law.

Salah Khashoggi lives in Saudi Arabia and has received financial compensation from the royal court for his father's killing.

Saudi Arabia initially offered shifting accounts about Khashoggi's disappearance, including claiming to have surveillance video showing him walking out of the consulate alive. As international pressure mounted because of Turkish leaks, the kingdom eventually settled on the explanation that he was killed by rogue officials in a brawl inside the consulate.

Prior to his killing, Khashoggi had been writing critically of Prince Mohammed in columns for the Washington Post at a time when the young heir to the throne was being widely hailed in the U.S. for pushing through social reforms and curtailing the power of religious conservatives.

Dozens of perceived critics of the prince remain in prison, including women's rights activists, and face trial on national security charges. Khashoggi left Saudi Arabia for the US just as Prince Mohammed was beginning to detain writers and critics in late 2017.

Other critics of the crown prince have said their security has been threatened following Khashoggi's killing.