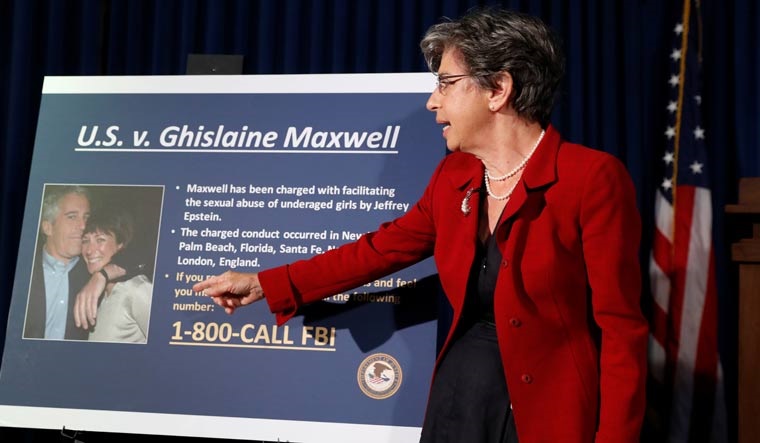 Audrey Strauss, Acting United States Attorney for the Southern District of New York speaks at a news conference announcing charges against Ghislaine Maxwell for her role in the sexual exploitation and abuse of minor girls by Jeffrey Epstein in New York City | Reuters

Attorneys of Ghislaine Maxwell, the alleged accomplice of accused sex trafficker Jeffery Epstein, are trying hard to prevent several sealed documents from being exposed. In a court filing on Monday, they said they have learned of “critical new information” that impacts her criminal case and a civil case where dozens of documents are expected to be unsealed.

A New York federal judge on July 31 released hundreds of pages of deposition transcripts and other documents related to a defamation suit against Maxwell, who is accused of helping the late Jeffrey Epstein run a sex trafficking operation that catered to rich and powerful men. On August 3, Maxwell won the legal fight to keep 'highly intrusive' documents about her sex life sealed, hours before they were due to be released.

The 58-year-old British socialite had argued the information could destroy her chances of a fair trial against charges she facilitated a sex trafficking operation by late financier Jeffrey Epstein. Among the sealed documents are believed to be Maxwell's deposition, which had been taken in April 2016 for a now-settled civil defamation lawsuit against her by Virginia Roberts Giuffre, who accused Epstein of keeping her as a 'sex slave' with Maxwell's help.

Her attorneys have asked for the documents to remain sealed for three weeks as they work with prosecutors to see if they can share information with the court.

The attorneys initiated conversations with the US Attorney's Office for the Southern District of New York to modify the protective order.

Last month, Maxwell had pleaded not guilty to charges by New York federal prosecutors that she helped recruit, groom and sexually abuse minors as young as 14.

On August 10, a New York federal judge unsealed correspondences from attorneys for celebrity lawyer Alan Dershowitz and Victoria’s Secret founder Leslie Wexner in a defamation case. These correspondences are likely to reveal more about the life of Jeffrey Epstein. Dershowitz, Espetsin’s lawyer and friend, is said to be instrumental in negotiating a non-prosecution agreement more than a decade ago that absolved Epstein, his close associates and unnamed others of potential federal charges of sex trafficking. Dershowitz is now countersuing Giuffre, who accused Epstein of forcing her to have sex with Dershowitz and Britain’s Prince Andrew for four years.

Epstein was found dead on August 10 2019, as he awaited trial in a New York prison for the aforementioned charges.