The infections in the country has jumped to more than 100,000 cases 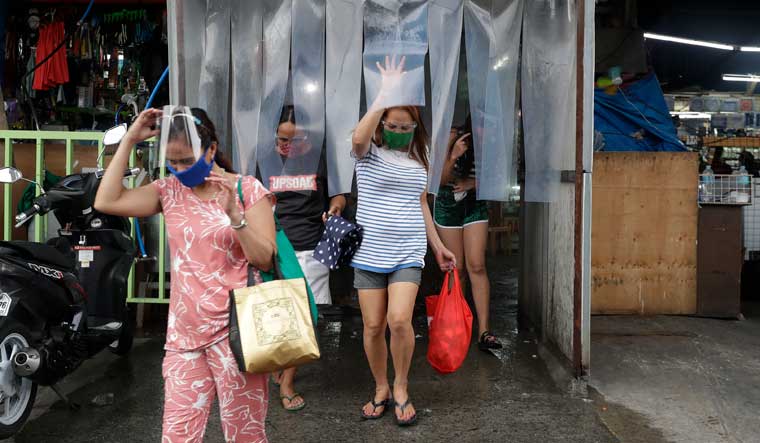 Women exit from a disinfecting area after buying food at a public market in preparation for stricter lockdown measures in Quezon city, the Philippines on Monday, August 3, 2020 | AP

President of Philippines Rodrigo Duterte announced stricter lockdown measures due to a surge in cases. Lockdown measures were relaxed on June 1 in a bid to restart the stagnant economy.

As per the new restrictions, police checkpoints will return to ensure only authorized people, including medical personnel and workers in vital companies, venture out of their homes, Interior Secretary Eduardo Ano said.

The infections in the country have jumped to more than 100,000 cases. Businesses in the capital city of Manila and outlying regions of Laguna, Cavite, Rizal and Bulacan comprise about 67 per cent of the national economy and the Duterte administration has walked a tightrope between public health and economic revival.

The economy contracted slightly in the first quarter but is likely facing a deep recession from the massive business closures that started when Duterte declared a strict lockdown in mid-March, an AP report reads.

Leaders of nearly 100 medical organizations in an online news conference asked Duterte to reimpose a tight lockdown, to give health workers a ‘time out’. They warned that the health system has been overwhelmed by infection spikes and may collapse as health workers fall ill or resign from exhaustion and fear. The "Modified Enhanced Community Quarantine" (MECQ) is expected to last until August 18.

“We are waging a losing battle against COVID-19 and we need to draw up a consolidated, definitive plan of action,” the groups said in a letter to Duterte. They expressed fears that the coronavirus crisis in the Philippines may worsen like in the US.

The Department of Health reported a recorded more than 2,000 deaths due to the virus on Sunday, which included the more than 100,000 confirmed cases of COVID-19.