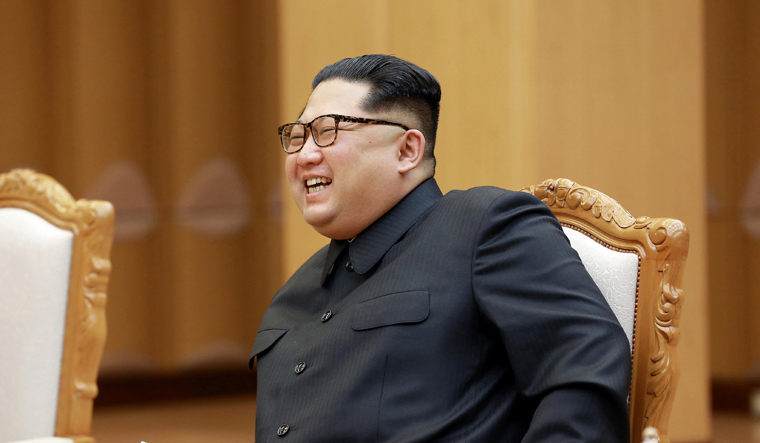 North Korean leader Kim Jong Un on Tuesday has said there will be no more war as the country’s nuclear weapons guarantee its safety and future despite unabated outside pressure and military threats, a Reuters report reads.

"With our reliable and effective self-defensive nuclear deterrent, there will be no more war on this earth, and our country's safety and future will be secured forever," a Korean Central News Agency (KCNA) quoted him as saying.

He made the statement as he celebrated the 67th anniversary of the end of the 1950-53 Korean War on July 27, with a reception for veterans.

Kim also said that the North developed nuclear weapons to win “absolute strength” to stave off another armed conflict. For years, North Korea has maintained that its pursuit of nuclear weapons has been purely defensive and meant to deter attempts at invasion or regime change.

But according to experts, nuclear weapons will allow the Kim regime to adopt more hostile and bellicose policies and deter opponents from responding to lower-level aggression.

The speech came amid stalled talks aimed at dismantling Pyongyang’s nuclear and missile programmes in exchange for sanctions relief from Washington. Since the failed summit between North Korea and the US in February 2019, talks to this effect haven’t taken off or initiated by either party.

North Korea has, for years, accused the US of employing a "hostile policy" against Jong Uns’ regime, pointing to Washington's alliance with South Korea. In his speech, Jong Un said, "We would like to make it clear that it does not necessarily mean the denuclearization is not possible."

US Secretary of State Mike Pompeo, in the meantime, had said that President Donald Trump would want to meet with Jong Un, only if it promised prospects of real progress.