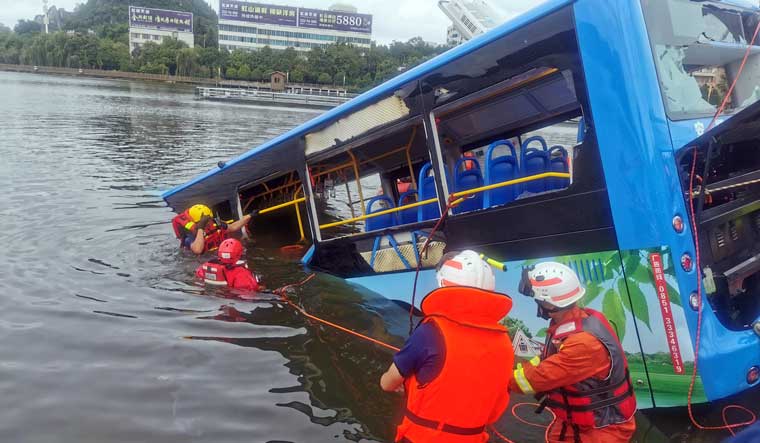 Rescue workers are seen at the site where a bus carrying students plunged into a reservoir, in Anshun, Guizhou province, China July 7, 2020 | China Daily via REUTERS

Unhappy that his home had been demolished by civic authorities, a bus driver in the city of Anshun in China’s southwest Guizhou Province deliberately crashed his bus into a lake, police say, as an investigation took place into the bus crash that killed 21 people on July 7.

The police say that an autopsy of his body found high levels of ethanol in his system, suggesting that he committed the act out of “personal resentment” over his rented flat being scheduled for demolition by civic authorities as part of a shanty town redevelopment plan, the South China Morning Post reported.

The man reportedly called a government hotline to complain that his house should not be demolished while he had yet to find another place to live. He reportedly purchased alcohol in the morning, filling it into a soft drink bottle, and went to work, the police said.

The man called his girlfriend and expressed ‘cynicism and pessimism” at 11:39am before taking the wheel of the bus at 11:47am.

He reportedly drank while driving at a bus stop while passengers disembarked. At the time of the crash, he had taken a wide turn, crossing five lanes of traffic before driving the bus into the lake.

Xinhua reported saying investigators found his “public-owned house”, had been provided by his employer when he began work at a diesel engine plant in Xixiu District. The agency reported that he had signed a “relocation subsidy agreement” with local authorities but did not take the money promised as part of the agreement. Police have since threatened to severely deal with “violation of law and discipline” during the house demolition and petition handling process, Xinhua reported.

21 were killed in the incident including the driver, while 15 were injured. 12 of those on board the bus were students who had just written the national college entrance examinations, five of whom died in the crash.

Local authorities across China have responded to the incident by launching awareness drivers. Haikou, in South China’s Hainan Province, rolled out a campaign called “No defective cars on roads, no physically or psychologically ill drivers driving,” Global Times reported.