US: Bolton feels Trump may not side India in a clash against China 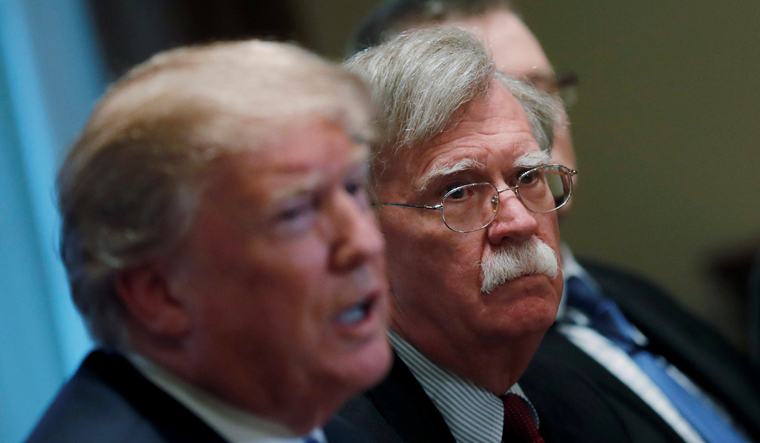 (File) US President Donald Trump receives a briefing from senior military leadership accompanied by his new National Security Adviser John Bolton at the Cabinet Room of the White House in Washington, DC | Reuters

Former United States national security adviser John Bolton feels that President Donald Trump will choose a trade deal with China rather than siding India in a clash between the two neighbours.

“I don’t think he knows anything about the history of these clashes over the decades between India and China. He may have been briefed on it, but history doesn’t really stick with him,” Bolton was quoted as saying in a WION report. “I think he sees the geostrategic relationship with China for example exclusively through the prism of trade. And trade is important because China has stolen intellectual property from the United States and other countries, engaged in forceful technology transfers for decades and it forms a major part of their economic success and therefore military power,” he said.

"I don’t know what Trump will do after the November elections once the guard rail is removed. He'll be back. He won't be criticising Beijing for putting Uyghurs in concentration camps or repressing Hong Kong. He will be back to the big China trade deal. So, if things were to develop between India and China in a more critical fashion, I'm not sure where he would come down," he further added.

The US and China relations have been strained ever since they have been involved in a trade war in 2018. It escalated after Trump accused China of not being transparent about the origin of the coronavirus that originated in China.

The US on July 10 imposed sanctions on four high-ranking members of the Chinese Communist Party. On July 2, the US House had passed sanctions on China after it passed the national security law of Hong Kong.

In the meantime, amid border-clashes between India and China, US Secretary of state Mike Pompeo had indicated that it could move its troops from Europe to the Line of Actual Control to help India. After India banned 59 Chinese apps, the US indicated that it might consider a similar move.