Social media made Donald Trump the US president. Now, it is threatening to break him

Four months to the US presidential elections, and the tide is turning against Trump 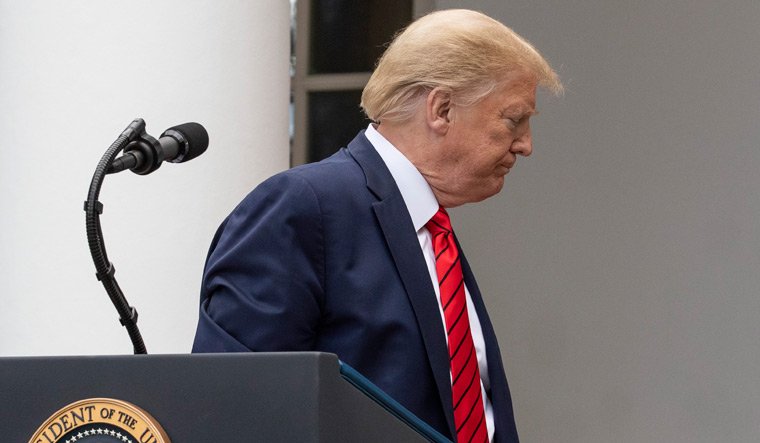 The November US elections are fast approaching and President Donald Trump is currently on the backfoot in his re-election bid compared to his rival Joe Biden; both the Democratic and Republican party machineries are going full throttle, but what could be the final clinching factor? In Trump's case, there is only one answer: social media; it made the reality show TV host president in 2016, and is now threatening to break his re-election bid.

How Trump and Biden use social media

Trump's primacy in the digital world is one of his top advantages, giving him a massive platform to connect with supporters and push a message that ignores his vulnerabilities related to the pandemic, unemployment and race relations. Trump cannot rely on the traditional media; he is largely reviled within the conventional corporate, leftist and centrist media outlets, while he is now picking fights with even the right-leaning TV channels like Fox News.

On an average day, as per news agency AP's calculations, Trump sends about 14 posts to the 28 million Facebook followers of his campaign account. His Democratic rival, Joe Biden, delivers about half that many posts to an audience of just 2 million. The numbers are similarly skewed in other spheres of the social media landscape. Trump also tweets with far greater velocity, sending, according to AP, more than 160 Twitter messages during a seven-day period starting June 14.

What is more interesting is the way in which the US president uses the social media. Trump has spent years cultivating a ragtag digital army of meme makers and political influencers who retweet campaign messages hundreds of times daily. Trump is outspending Biden on Google and YouTube advertising by nearly 3 to 1.

More than 50 of Trump's posts, according to AP, were retweets from an assortment of users that included the US Army, far-right meme makers, conservative news outlets, little-known congressional candidates and anonymous accounts that in some cases promoted conspiracy theories.

That is a point of area where Trump has an advantage over Biden—his close connection with the fanbase. Twitter users celebrate being retweeted by the president, or his inner circle, like the president's son, Donald Trump Jr., who has more than 5 million followers. Trump's followers see producing sardonic memes or videos as a game where the ultimate prize is a retweet from the president, according to experts. Giving the fans the ability to be amplified by the president, the stakes are much higher.

Biden is far more traditional on that count. He tweets only a handful of times, most of which are retweets from verified accounts, like former president Barack Obama, or established news outlets.

But, Biden and his team are now working feverishly to establish a social media force of their own. For the first time, according to multiple reports, Biden outspent Trump on Facebook advertising in June, pouring twice as much money into the platform as the president. His campaign is recruiting Instagram supporters to hold virtual fundraisers.

And, it is plotting ways to mobilise the power of hundreds of teens on TikTok.

But Trump's head start may be tough to overcome.

But Trump is facing obstacles

But, Trump's unimpeded access to the digital microphone is facing its limits. With four months until the US presidential election and the country's divisions reaching a boiling point, the social media companies are moderating and banning his traditional forums with increasing intensity.

Reddit, an online comment forum that is one of the world's most popular websites, on Monday banned a forum that supported Trump as part of a crackdown on hate speech. Reddit's action was part of a larger purge at the San Francisco-based site. The company said it took down a total of 2,000 forums, known as the site as subreddits, most of which it said were inactive or had few users. The Trump Reddit forum, called The_Donald, was banned because it encouraged violence, regularly broke other Reddit rules, and defiantly antagonised both Reddit and other forums, the company said in a statement. Reddit had previously tried to discipline the forum.

Twitch, which is owned by Amazon, temporarily suspended Trump's campaign account for violating its hateful conduct rules. For its part, Twitch pointed to comments the president made at two rallies, videos of which were posted on the site. In one, a livestream of a rally in Tulsa, Oklahoma, Trump talked about a "very tough hombre" breaking into someone's home. The other was from a 2015 campaign rally that was recently posted on Twitch, in which Trump said Mexico sends rapists and criminals to the U.S. Twitch declined to say how long the suspension will last.

Facebook promised it would label Trump posts when they break rules around voting or hate speech.

Video messaging platform Snapchat last month also said it would keep the president's account active and searchable but would stop showcasing his profile on the platform.

Why are these changes happening? Simple answer: Mounting advertiser pressure. Social media companies, led by Facebook, now face a reckoning over what critics call indefensible excuses for amplifying divisions, hate and misinformation on their platforms. Civil rights groups have called on large advertisers to stop Facebook ad campaigns during July, saying the social network isn't doing enough to curtail racist and violent content on its platform.

Companies such as the consumer goods giant Unilever one of the world's largest advertisers as well as Verizon, Ford and many smaller brands have joined the boycott, some for the month of July and others for the rest of the year. New companies have been signing on to the boycott almost every day. While some are pausing ads only on Facebook, others have also stepped back from advertising on Twitter and other platforms.

Ford Motor Co. put the brakes on all national social media advertising for the next 30 days. The company says hate speech, as well as posts advocating violence and racial injustice, need to be eradicated from the sites.

The White House referred a request for comment to Trump's reelection campaign. Tim Murtaugh, the campaign's director of communications, said that people who want to hear directly from the president should download the campaign's app.

Polls do not paint a good picture for Trump's re-election bid. Multiple national polls that emerged in June have put Trump at a staggering disadvantage when it comes to his Democratic rival Joe Biden.

Polling organisation Gallup recorded Trump's support as declining over 10 points to 39 per cent; Biden leads him in most of the key battleground states. A CNN poll showed Trump lagging behind Biden by 14 points nationally. A Wall Street Journal/NBC News poll reported that 80 per cent of Americans feel the country is spiralling "out of control". Trump's former defense secretary—with the backing of Trump's former chief of staff—warned that Trump was violating the Constitution and needlessly dividing Americans.

And, the coronavirus pandemic was a big factor in Trump's fall in popularity. COVID-19's mounting human and economic tolls—and the president's defiant response—are believed to have cost him support among white, rural constituencies key to victory. His signature rallies had been frozen for months, and his cash advantage over Biden, while vast, wasn't growing as quickly as hoped because the pandemic put a halt to high-dollar fundraisers. Internal campaign surveys and public polling showed a steady erosion in support for Trump among seniors and in battleground states once believed to be leaning decisively in the president's direction, multiple news reports claim.