OPINION: A memory of Wuhan before the coronavirus 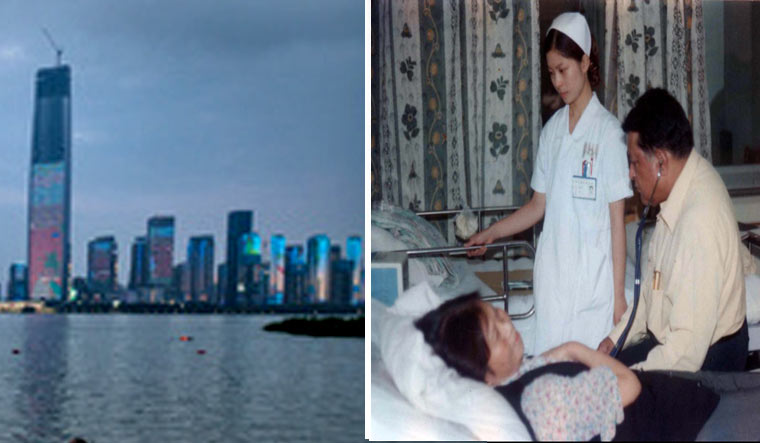 Collage: (L) The city of Wuhan, (R) Dr. K.M. Cherian treating a patient during his visit to a Wuhan hospital | Reuters, special arrangement

It is very surprising, for a city like Wuhan to be the origin for something as deadly as the coronavirus! I have a completely different perspective of Wuhan after I went there in 2018, when I saw it as a modern, clean and beautiful city.

Dr. Bo Dong accompanied me as we spent a day at the Wuhan Asia Heart Hospital. The cases there and technology used there were the same as what is in India. The staff of the hospital were friendly and ready to explain all my doubts, although perhaps only 10 per cent of the staff could speak English. Earlier, when I had visited the Nanjing Military Hospital as one of their honorary professors, only a few doctors could speak English. It was quite a task for me to perform operations without speaking or asking for instruments. However, I enjoyed operating by taking the instruments which I wanted from the tray.

Cooperation in the medical field is of tremendous advantage to both India and China. They [the Chinese] are interested in learning about our [medical] advances, especially in providing high-quality yet cheap medical care, transplants and stem cells.

I delivered two lectures on July 21, as the opening session both in the morning and in the afternoon; the first on the ‘Past, present and future of cardiac surgery in India’ and the second on ‘Cost containment, Make in India and affordable medical care in developing world’.

As a connoisseur of food, I had the amazing opportunity to eat lunch with my friends from the Wuhan Hospital in a seafood restaurant. The food served included live prawns, lobsters, fish and—to my surprise—octopus. The live prawns were put in a large bowl and were thrown into what looked like water. I was perplexed to see the prawns trying to jump out of the bowl. Later on, I realized, that what looked like water was absolute alcohol and the jumping of these prawns helps clean them of dirt and sand. Since they are then partially cooked as well, the prawns become sterilized. Wow! What a way to ensure that the food is clean.

I thoroughly enjoyed my lunch, which included fresh oysters, except for the live octopus, which was around 18 inches long. To my surprise, the Chinese rice beer was also of very high quality.

One good thing that I noticed was that it was totally a cashless economy, whether it was in the small tea shops, restaurants or shopping centres: All payments are done using QR code systems, including tickets and tipping too.

By the roadside, I saw an old man sitting on a bench and playing the fiddle. A friend of mine who had spent some time in Kerala remarked that if this was in India, you would have seen a cloth in front of the man, where people would have dropped their tips. But, even in begging China has modernised and become sophisticated—in front of this elderly man was a card containing a QR code [for payment]. The people passing, who appeared to be taking photos, were in reality (so I was told) making payments to him, so that the money would get deposited in his account by 8 pm. Is this not a dignified way of begging?

Though this was my sixth or seventh visit to China, this was the first time I had visited Wuhan. Since I had been operating in Nanjing earlier, I feel Wuhan was a Mecca of medical practice in China. Apart from the Military Medical Headquarters. I was told that there are four medical colleges in the city, close to each other, and of which two were purely for Indian students—where they even serve South Indian dishes like idli, dosa and sambar.

When I hear so much chatter about Wuhan, it makes me nostalgic and takes me back to the time when I visited the city, and often leaves me wanting more of the delectable palette that Wuhan has to offer.