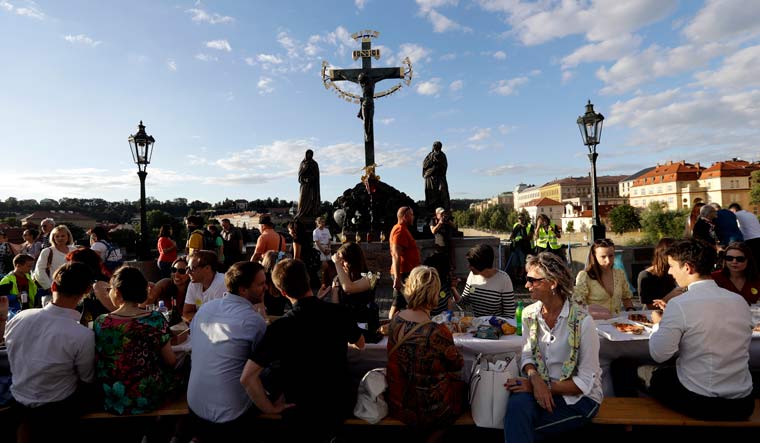 Residents sit to dine on a 500 meter long table set on the medieval Charles Bridge, after restrictions were eased following the coronavirus pandemic in Prague, Czech Republic | AP

Tossing social distancing to the wind, thousands gathered in the Czech Republic capital of Prague on Wednesday to participate in a COVID-19 “farewell” party, as revellers celebrated what they believe to be the end of the pandemic in Czechia.

A banquet was set up with a 500-metre-long table placed along the historic Charles Bridge, where the public were encouraged to dine together without observing social distancing, while musicians performed in the open and a street party ensued, as restrictions on large gatherings ended.

With a population of around 10 million, Czechia has had less than 12,000 cases of the novel coronavirus according to data collected by John Hopkins University, with just 349 deaths. The country. However, the country is still recording new cases, with a spike in June after a lull in April. With 305 new cases on June 28, this was the highest daily increase in over two months.

The event comes after World Health Organisation Director-General Tedros Adhanom Ghebreyesus warned that the “worst is yet to come” for the COVID-19 pandemic. Over 160,000 new cases have been reported every day for the past week, he said on Wednesday.

Czechia was the first European country to make the wearing of face masks mandatory and one of the earliest to impose a lockdown. It began easing restriction from April and lifted most of them by May 11. On June 9, it reopened museums and cinemas, and around that time, opened up its border with Croatia. Events of up to 500 people were allowed. On Tuesday, the face mask rule was relaxed for use in indoor facilities, though masks will still be required in the Prague underground and in certain medical establishments in the country’s north-eastern region where infections have spiked, according to The Guardian.