Canada: Trudeau, son step out for ice cream after lifting of COVID-19 curbs 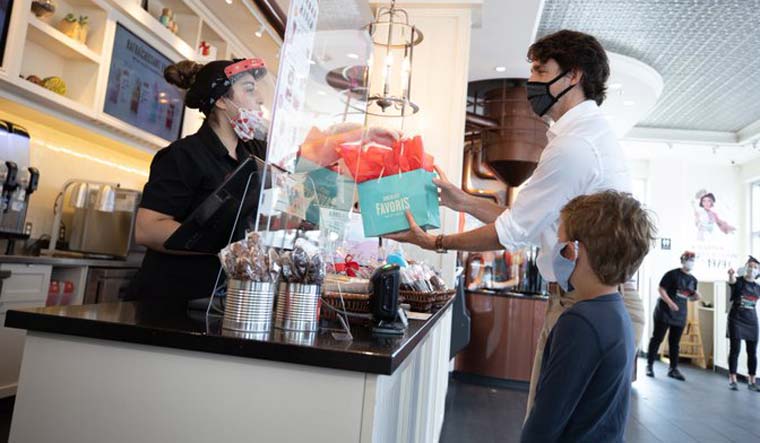 Provinces in Canada started easing coronavirus restrictions from May 25 onwards.

Canadian Prime Minister Justin Trudeau on Wednesday took his son for an ice cream outing for the first time since the restrictions started easing.

Provinces in Canada declared an emergency around mid-March and closed schools and non-essential businesses in response to the pandemic.

Even though we’re not able to celebrate Fête nationale du Quebec and Saint-Jean-Baptiste Day like we usually do, I hope you’re finding new ways to celebrate - Hadrien and I stopped by @ChocoFavoris in Gatineau today to pick up some treats for the family! pic.twitter.com/sJ2TzMLsa4

Trudeau’s six-year-old son, Hadrien, seemed happy to be wearing a mask with his father getting ice cream. The duo was spotted at Chocolats Favoris in Gatineau, Quebec.

Both of them headed out to the patio where they took off their masks to enjoy the ice cream. Wednesday was also Saint-Jean-Baptiste Day in Quebec.

According to a report, Trudeau said the Chocolats Favoris tapped into a federal emergency wage subsidy and business loan to weather the pandemic to “avoid being frozen out of the frozen treat market”.

With the coronavirus pandemic affecting Canada’s economy, Canada has been stripped of its AAA credit rating by Fitch Ratings Inc.

According to experts at Fitch, the nation’s response to the virus increases its debt by 115.1 per cent of GDP in 2020. The agency, however, sees Canada’s debt:GDP ratio stabilising over the medium term.

Yves Giroux, Canada's parliamentary budget officer, said would be worried if all rating agencies downgrade Canada and leave other country ratings unchanged. "It’s one thing to have one downgrade, but if it’s all agencies downgrading us and leaving other G7 countries at the same rating as they currently are, that would send a strange signal to the markets that Canada is riskier relative to these other countries, or has not managed its spending as well as other countries who have equally been affected by COVID-19. Last March, a year before the COVID-19 pandemic took hold, Fitch released a report, warning high debt levels at the federal and provincial level could soon become 'incompatible' with Canada preserving its top-notch rating,” Yves Giroux told BNN Bloomberg.