A separate grenade attack in Karachi killed 1 and wounded 10 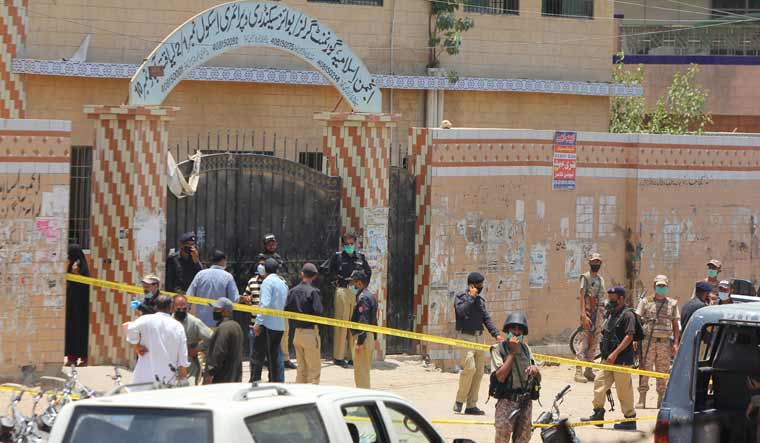 Two Pakistani paramilitary soldiers were among four people killed in separate incidents of a roadside bomb explosion targeting a security vehicle and a hand grenade attack on a government office in Sindh province on Friday, police said.

Two Pakistan Rangers personnel and a civilian were killed when a roadside bomb targeting the vehicle of the security troops exploded near a railway station in Ghotki town in Sindh province.

Three other persons, including a paramilitary official, were also injured in the blast.

The remote-controlled blast took place near the vehicle of the paramilitary Pakistan Rangers which was parked at the main railway station in Ghotki, police said.

Two Pakistan Rangers troops and a civilian who was at a meat shop in a market near the railway station were killed in the explosion, they said.

Hours later, a man was killed and eight others injured when unidentified assailants hurled a hand grenade at a government office in the congested Liaquatabad area of Karachi, police said.

According to police, people had lined up outside the Ehsaas programme office to collect cash being distributed by the government under the initiative to help poor people hit by the coronavirus pandemic.

"Two people riding on a motorcycle came to the Ehsaas programme office. One of them hurled a hand grenade at the office which led to an explosion," a police official said.

Nine people were injured in the explosion. They were shifted to the nearby Abbasi Shaheed hospital where one of them succumbed to his injuries, the official said.

No group has claimed responsibility for either attacks, which occurred at a time when the country is battling the coronavirus pandemic.

Pakistan has been witnessing scores of militant attacks in recent times.

Friday's attacks came a week after a powerful bomb blast ripped through a crowded market in the garrison city of Rawalpindi on June 12, killing one person and injuring 12 others, including three children.