Tear gas and burning cars in US cities as unrest continues

In Philadelphia, at least 13 officers were injured when protests turned violent 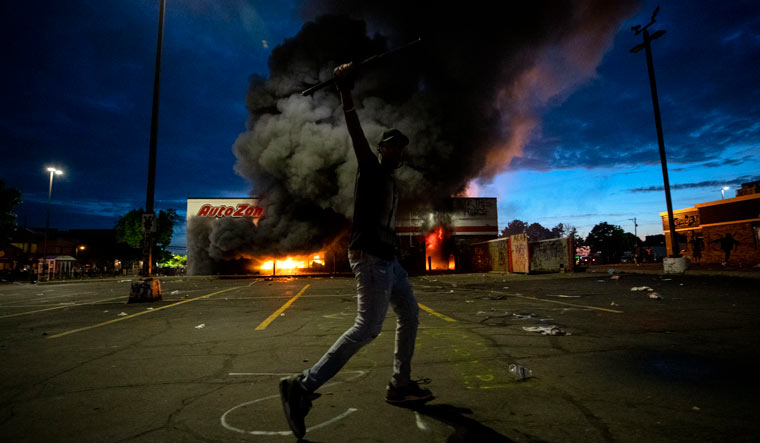 A man poses for a photo in the parking lot of an AutoZone store in flames, while protesters hold a rally for George Floyd in Minneapolis on Wednesday, May 27, 2020 | AP

Tense protests over the death of George Floyd and other police killings of black men grew Saturday from New York to Tulsa to Los Angeles, with police cars set ablaze and reports of injuries mounting on all sides as the country lurched toward another night of unrest after months of coronavirus lockdowns.

The protests, which began in Minneapolis following Floyd's death Monday after a police officer pressed a knee on his neck for more than eight minutes, have left parts of the city a grid of broken windows, burned-out buildings and ransacked stores. The unrest has since become a national phenomenon as protesters decry years of deaths at police hands.

The large crowds involved, with many people not wearing masks or social distancing, raised concerns among health experts about the potential for helping spread the coronavirus pandemic at a time when overall deaths are on the decline nationwide and much of the country is in the process of reopening society and the economy.

After a tumultuous Friday night, racially diverse crowds took to the streets again for mostly peaceful demonstrations in dozens of cities from coast to coast. The previous day's protests also started calmly, but many descended into violence later in the day.

In Washington, growing crowds outside the White House chanted, taunted Secret Service agents and at times pushed against security barriers. US president Donald Trump, who spent much of Saturday in Florida for the SpaceX rocket launch, landed on the residence's lawn in the presidential helicopter at dusk and went inside without speaking to journalists.

In Philadelphia, at least 13 officers were injured when peaceful protests turned violent and at least four police vehicles were set on fire. Other fires were set throughout downtown.

In the Greenwood District of Tulsa, Oklahoma, the site of a 1921 massacre of black people that left as many as 300 dead and the city's thriving black district in ruins, protesters blocked intersections and chanted the name of Terence Crutcher, a black man killed by a police officer in 2016.

In Tallahassee, Florida, a pickup truck drove through a crowd of protesters, sending some running and screaming as the vehicle stopped and started and at one point had a person on its hood, police said, but no serious injuries were reported. Police handcuffed the driver but did not release his name or say whether he would face charges.

In Los Angeles, protesters chanted Black Lives Matter, some within inches of the face shields of officers. Police used batons to move the crowd back and fired rubber bullets. One man used a skateboard to try to break a police SUV's windshield. A spray-painted police car burned in the street.

And in New York City, video posted to social media showed officers using batons and shoving protesters down as they made arrests and cleared streets. Another video showed two NYPD cruisers driving into protesters who were pushing a barricade against a police car and pelting it with objects, knocking several to the ground.

"Our country has a sickness. We have to be out here," said Brianna Petrisko, among those at lower Manhattan's Foley Square, where most were wearing masks amid the coronavirus pandemic. "This is the only way we're going to be heard."

Back in Minneapolis, the city where the protests began, 29-year-old Sam Allkija said the damage seen in recent days reflects longstanding frustration and rage in the black community.

"I don't condone them," he said. "But you have to look deeper into why these riots are happening." Minnesota Governor Tim Walz fully mobilized the state's National Guard and promised a massive show of force.

"The situation in Minneapolis is no longer in any way about the murder of George Floyd," Walz said. "It is about attacking civil society, instilling fear and disrupting our great cities."

Soon after the city's 8 pm curfew went into force, lines of police cars and officers in riot gear moved in to confront protesters, firing tear gas to push away throngs of people milling around the city's 5th police precinct station.

The tougher tactics came after city and state leaders were criticized for not forcefully enough confronting days of violent and damaging protests that included protesters burning down a police station shortly after officers abandoned it.

Overnight curfews were imposed in more than a dozen major cities nationwide, ranging from 6 pm in parts of South Carolina to 10 pm around Ohio. People were also told to be off the streets of Atlanta, Denver, Los Angeles, Seattle and Minneapolis  where thousands had ignored the same order Friday night. More than 1,400 people have been arrested in 16 cities since Thursday, with more than 500 of those happening in Los Angeles on Friday.

The unrest comes at a time when most Americans have spent months inside over concerns surrounding the coronavirus, which the president has called an "invisible enemy."

The events of the last 72 hours, seen live on national television, have shown the opposite: a sudden pivot to crowds, screaming protesters and burning buildings, a stark contrast to the empty streets of recent months.