The first Iranian ship to arrive, the Fortune, is trailed by four other tankers 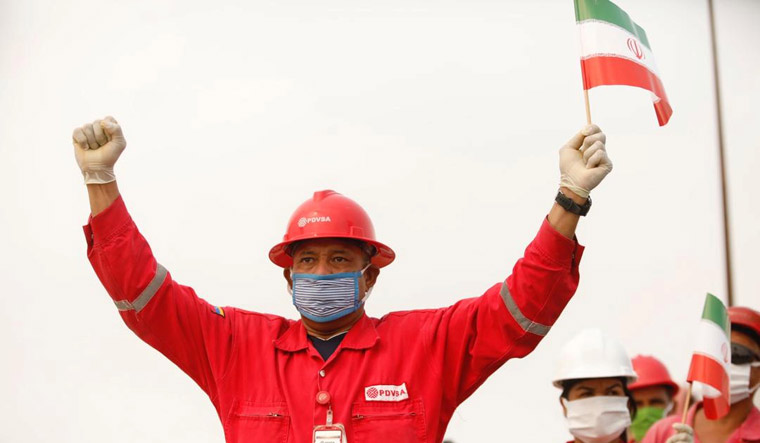 A worker of the state-oil company Pdvsa holds an Iranian flag during the arrival of the Iranian tanker ship "Fortune" at El Palito refinery in Puerto Cabello, Venezuela | Via Reuters

Heralding the strengthening of ties between Venezuela and Iran, the first of five Iranian oil tankers with gasoline docked at the South American nation, defying sanctions imposed by the US.

“We keep moving forward and winning,” Venezuela’s Minister of Energy Tareck El Aissami tweeted. According to the US, both Iran and Venezuela are ruled by repressive regimes.

The first Iranian ship to arrive, the Fortune, is trailed by four other tankers, expected to arrive in the next few days.

Once a prolific producer of crude oil with a refining infrastructure for making gasoline and diesel fuel, Venezuela’s oil reserves have rapidly depleted, due to mismanagement, lack of investment and sanctions imposed by the US. Gasoline is being rationed, forcing people to stand in long lines to get limited amounts of fuel.

Maduro has been seeking fuel on the international market in the hope to meet demand and been in touch with another oil producer on Washington's black list, the Islamic Republic of Iran. With Iran too, under aggressive economic sanctions from the US, exporting fuel to Venezuela will provide Iran with much-needed income.

The US has been closely monitoring the shipments, which it believes are being paid for with gold. The Donald Trump administration released a long paper on the tactics used by rogue nations to avoid sanctions, warning shippers they could face action for violations.

Washington considers Maduro’s election victory a fraud because his most popular rivals were banned from running.

Amidst rising tension in Venezuela, Prosecutor General Tarek William Saab on Monday asked the pro-Maduro Supreme Court to decide whether Guaido’s political party, Popular Will, should be designated a terrorist organisation.

This comes in the light of a recently failed incursion, allegedly carried out by mercenaries appointed by Guaido’s party. While Guaido advisers had dealt with the man leading the attempt, Guaido himself denied any involvement.

According to the Miami-based investment firm Caracas Capital Markets, Iranian shipments were anything but a victory for Venezuelans. The first tanker carries an estimated 11 million gallons of gasoline to a nation with roughly 5 million cars, he said.

Venezuelan President Maduro on Sunday expressed gratitude to Iranian President Hassan Rouhani, Iran’s Supreme Leader Ayatollah Ai Khamenei and the Iranian people from “the bottom of my heart”. Maduro added that Iran and Venezuela have a right to engage in trade just like any other nations in the world, calling both the states as rebel nations, that will never kneel before the US.

“Venezuela has friends in this world, and brave friends at that,” he added.