China is North Korea's most significant ally and economic lifeline 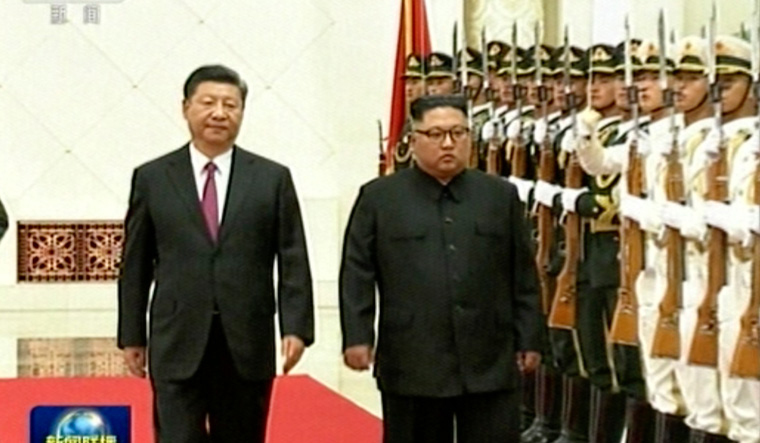 In this image taken from a video footage run by China's CCTV, Chinese President Xi Jinping, walks with North Korean leader Kim Jong Un during a welcome ceremony at the Great Hall of the People in Beijing | CCTV via AP Video

North Korea’s leader Kim Jong Un praised Chinese premier Xi Jinping for success in getting the coronavirus epidemic under control. Jong, whose health has been the topic of speculation, reached out to traditional ally Beijing. This came after an assessment by the South Korea’s spy agency that the pandemic is hurting the North's economy, already crippled by decades of policy failures and US-led international sanctions over its nuclear weapons program.

China is North Korea's most significant ally and economic lifeline, accounting for about 90 per cent of the country's external trade. But, as per an assessment by South Korea’s spy agency, trade between China and the North declined about 55 per cent in the first quarter and declined 91 per cent in March.

North Korea, which took intense actions like closing its borders in January and quarantining thousands, contends that it has had no cases of infection.

A North Korea defector has said that the North’s coronavirus death toll is so high that it is beyond imagination. A South Korean lawmaker said that an outbreak in the North cannot be ruled out.

He added that skyrocketing food prices and panic-buying in Pyongyang, and a reduction in Kim Jong Un's public appearances this year, were evidence of the impact.

The North Korea defector told the Committee for Human Rights that a new hospital being built in Pyongyang is all part of the propaganda effort. Kim Myong, who formerly held a senior government role in North Korea, said it was "absurd lies" to claim the country had no cases when the true number "very likely... exceeds imagination".

He added that Kim Jong Un, in March, unexpectedly launched a project to build the Pyongyang General Hospital and appeared at the groundbreaking ceremony.

Meanwhile, South Korea reported 12 fresh cases of the new coronavirus, its first increase above 10 in five days. Figures by the Korea Centre for Disease Control and Prevention brought the national total to 10,822 cases and 256 deaths. Three of the new cases were detected in the hardest-hit city of Daegu, and three were passengers screened at airports.