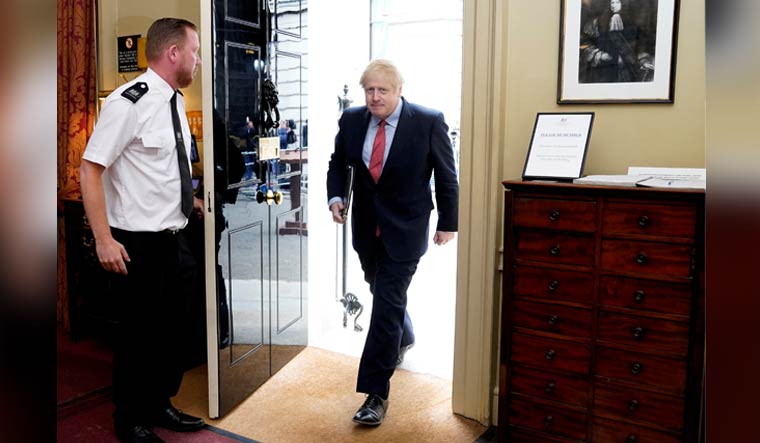 UK Prime Minister Boris Johnson after returning to work on Monday said that the UK is turning the tide on tackling the coronavirus, but said that he won’t be forced into ending the lockdown prematurely as the nation is still facing a moment of “maximum risk”.

Johnson, who tested positive for coronavirus on March 27, was taken to the ICU on April 7. And while he was discharged from the St Thomas Hospital in London on April 12, he went to the state country home at Chequers for recuperation. And though Johnson did not engage in official work while in recuperation, he spoke to Queen Elizabeth II and US President Donald Trump, and some senior ministers.

"If this virus were a physical assailant an unexpected and invisible mugger which I can tell you from personal experience it is then this is the moment when we have begun together to wrestle it to the floor," he was quoted as saying in an AP report.

As of on Sunday, the coronavirus had infected 152,840 people and claimed 20,732 lives in the UK. A majority of the growing number of cases are Indian and other non-white people, from boroughs in London like Brent, Barnet, Ealing and Harrow.

He also said that he was keen to get the suffering economy back on track, but at the same time, did not wish to “throw away all the effort and the sacrifice of the British people and to risk a second major outbreak and huge loss of life and the overwhelming of the NHS.”

So he urged the people to contain their impatience as he believed that the UK was at the end of the “first phase of this conflict, and in spite of all the suffering we have so nearly succeeded we defied so many predictions; we did not run out of ventilators or ICU beds”.

UK’s health minister too was quoted as saying in The Guardian that the lockdown had been working and “now is not the time to let up”.