29 Turkish soldiers were killed in Idlib in Russia-backed strikes 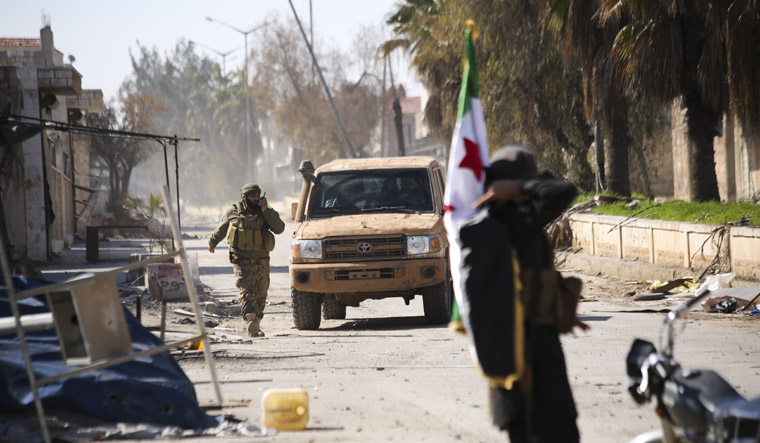 Conflict over rebel-held Idlib province of northwestern Syria could be the flashpoint of a major military conflict between Turkey and Russia, as a recent Syrian government-backed offensive has reportedly killed 29 Turkish soldiers. In Syria, President Bashar al-Assad is backed by Iran and Russia, while Turkey supports the rebel forces against the government. The US, after initially supporting the rebels, had shifted to backing the Kurdish Syrian Democratic Forces (SDF) in their offensive against the Islamic State.

In northwestern Syria, rebel-held Idlib is a province with 12 Turkish observation posts, set up after a 2018 deal with Russia in a bid to prevent a Syrian regime offensive. But despite the agreement, Syrian President Bashar al-Assad has pressed ahead with an assault to retake the last rebel-held bastion, backed by Russian air support. Erdogan has repeatedly warned the regime to withdraw from Turkish posts before the end of February, threatening an "imminent" operation if Damascus did not heed the warning. Jihadists and Turkish-backed rebels on Thursday re-entered Saraqeb, a key Idlib crossroads town they had lost earlier in February, reversing one of the main gains of the Syrian government's devastating offensive. The rebel counteroffensive could, however, be short-lived as Russian-backed Syrian troops continued to chip away at other parts of the rebel bastion, capturing 20 localities.

Erdogan’s adviser on TV: We fought #Russia 16 times in the past, we will do it again, our vengeance will be quite terrible,”

In the latest escalation, late on Thursday night, 29 Turkish soldiers were killed in Idlib, in an air strike blamed on the Syrian government. Earlier, Turkish President Recep Tayyip Erdogan held an extraordinary meeting on the situation in Idlib after the attack, at his presidential complex. The security summit was attended by Defence Minister Hulusi Akar, Foreign Minister Mevlut Cavusoglu, Chief of Staff General Yasar Guler and spy chief Hakan Fidan. The Turkish presidency confirmed the meeting lasted two hours but did not say what the outcome of the talks were. The latest incident means a total of 42 Turkish security personnel have been killed this month in Idlib.

Assad's forces, backed by massive Russian air strikes, have pushed hard into northwest Syria in recent months to recapture Idlib. According to Reuters, the push on the Saraqeb region comes before the end-of-February deadline set by Erdogan, and Turkish spokespersons have said that when the time given to the regime to withdraw expires, the "Turkish Armed Forces will carry out their duties based on the orders they receive and nobody should doubt our determination about this". It is unclear whether talks are still ongoing between Putin and Erdogan.

Russia, late on Thursday, accused Turkey of illegally sending strike drones into Idlib region, and of providing artillery support for rebels. Russian state TV, according to Reuters, had said Turkish military specialists in Idlib were using shoulder-fired missiles to try to shoot down Russian and Syrian military aircraft, and that Turkey was in breach of agreements it had made with Russia over Syria.

Turkey and the West respond

Turkey said it was retaliating against the Syrian regime. "All known targets of the regime have come and will continue to come under fire from the air and ground," Turkish president's communications director, Fahrettin Altun, said in a statement. "We urge the international community to fulfil its responsibilities," Altun added, to stop the regime's "crimes against humanity".

The United States demanded that the Syrian regime and its ally Russia end their "despicable" operation in Idlib province and vowed to support Ankara. "We stand by our NATO ally Turkey and continue to call for an immediate end to this despicable offensive by the Assad regime, Russia and Iranian-backed forces," a US State Department spokesperson said. "We are looking at options on how we can best support Turkey in this crisis."

US relations with Turkey had, over the last year, deteriorated sharply since Ankara's military intervention in Syria as well as its purchase of Russia's S-400 missile defence system in defiance of warnings from allies in NATO, an alliance created to counter Moscow.